Using more than 2 GB in a Sony Clié
with Palm OS 5.x

Hint: most images can be enlagred by downloading or opening them in a new tab.

The Palm OS 4.x devices where only able to read and write 128MB Memory Sticks. This limitation is defined in the MemoryStick protocol - thanks to Dmitry Grinberg for this information! Sadly, there is currently no way around this limitation. There was only a MemoryStick, which has a switch for two 128MB chips on one PCB. But also there: you need to remove the stick, in order to trigger the switch and be able to use the other 128MB.

The test with a 2GB Memory Stick

In order to test the offical maximum by myself, I ordered a 2GB Memory Stick PRO™ Mark 2: 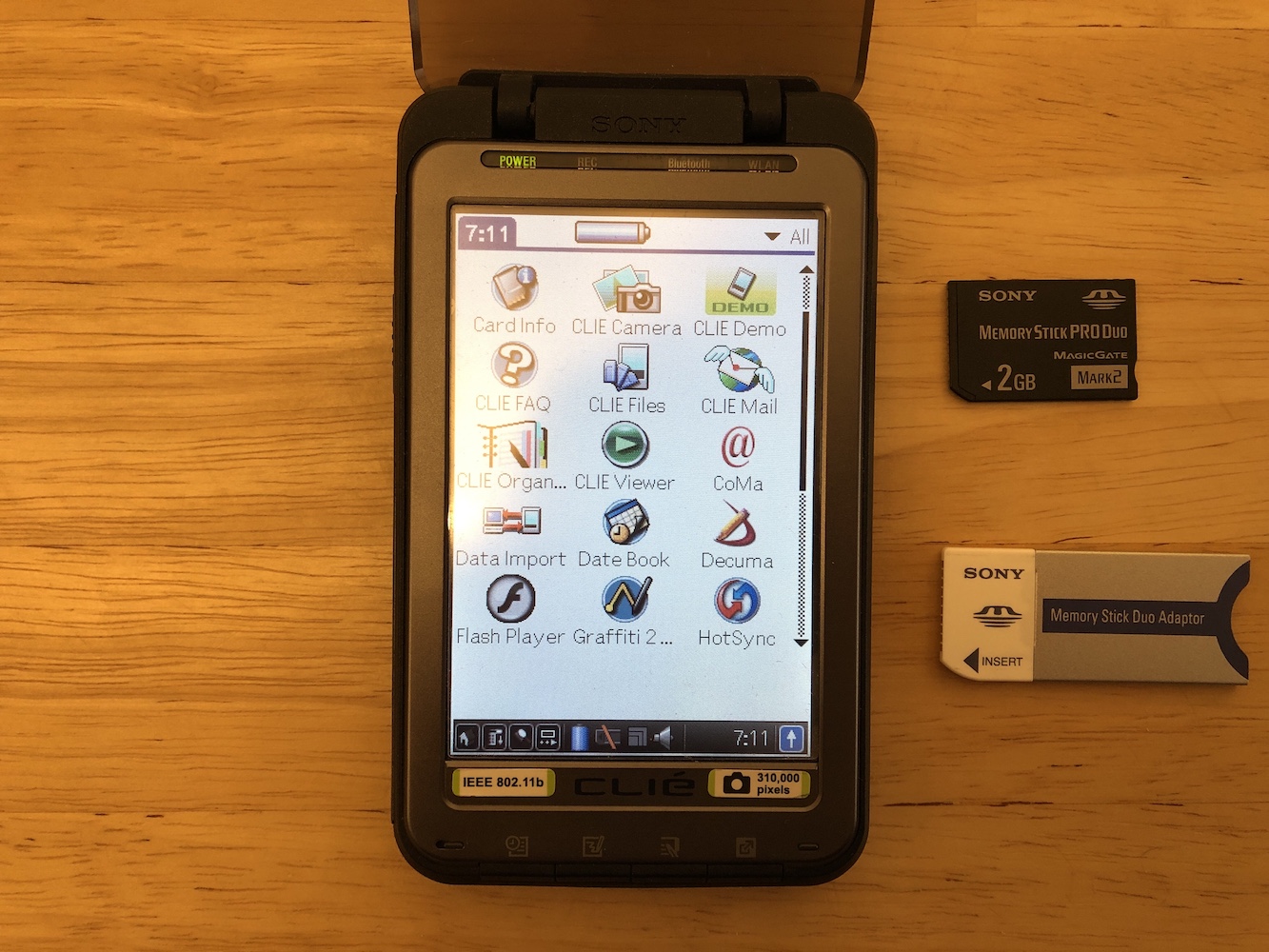 As expected, the Memory Stick has been recognised correctly: 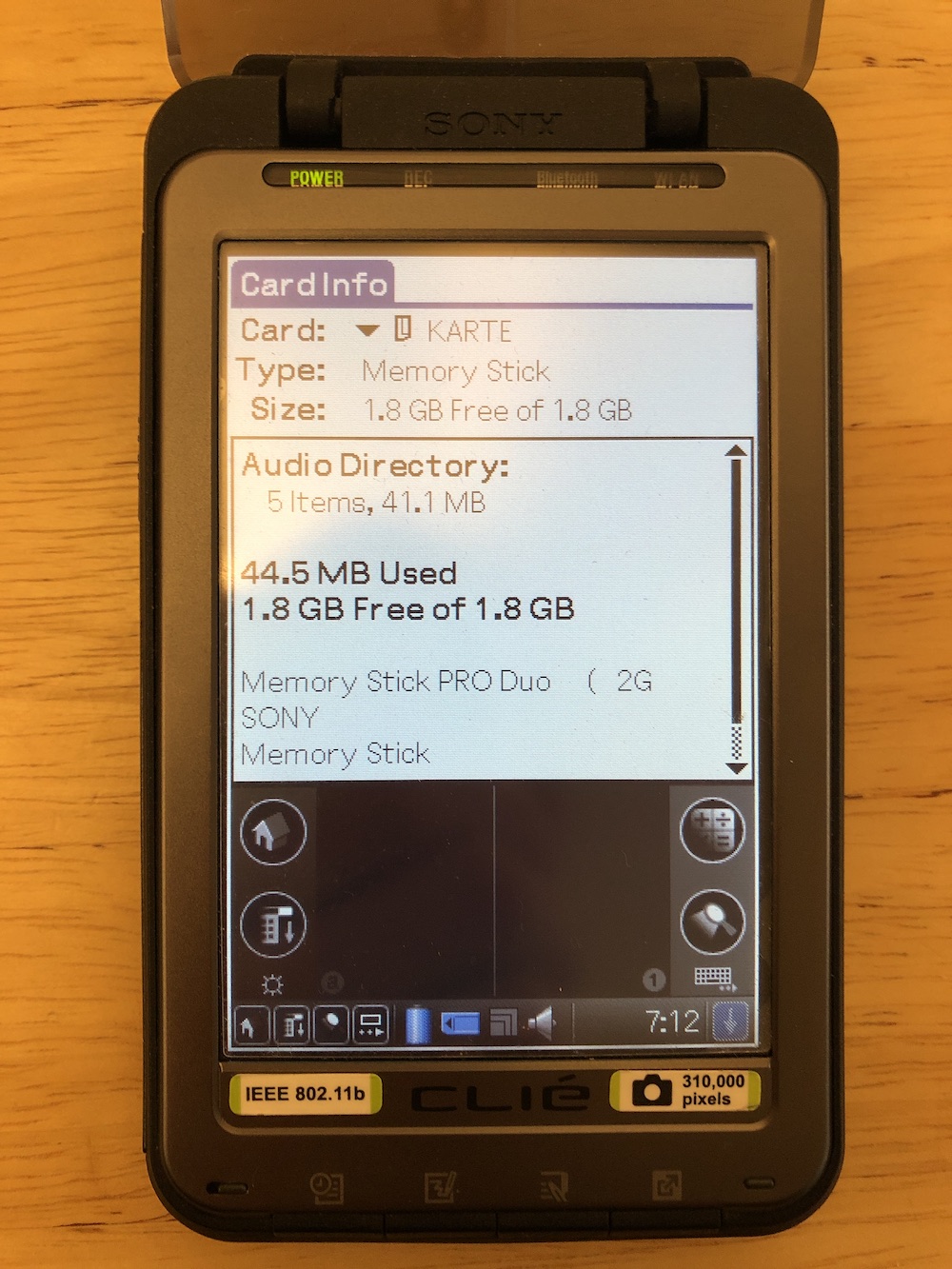 Also writing images from the camera onto the stick was no problem: 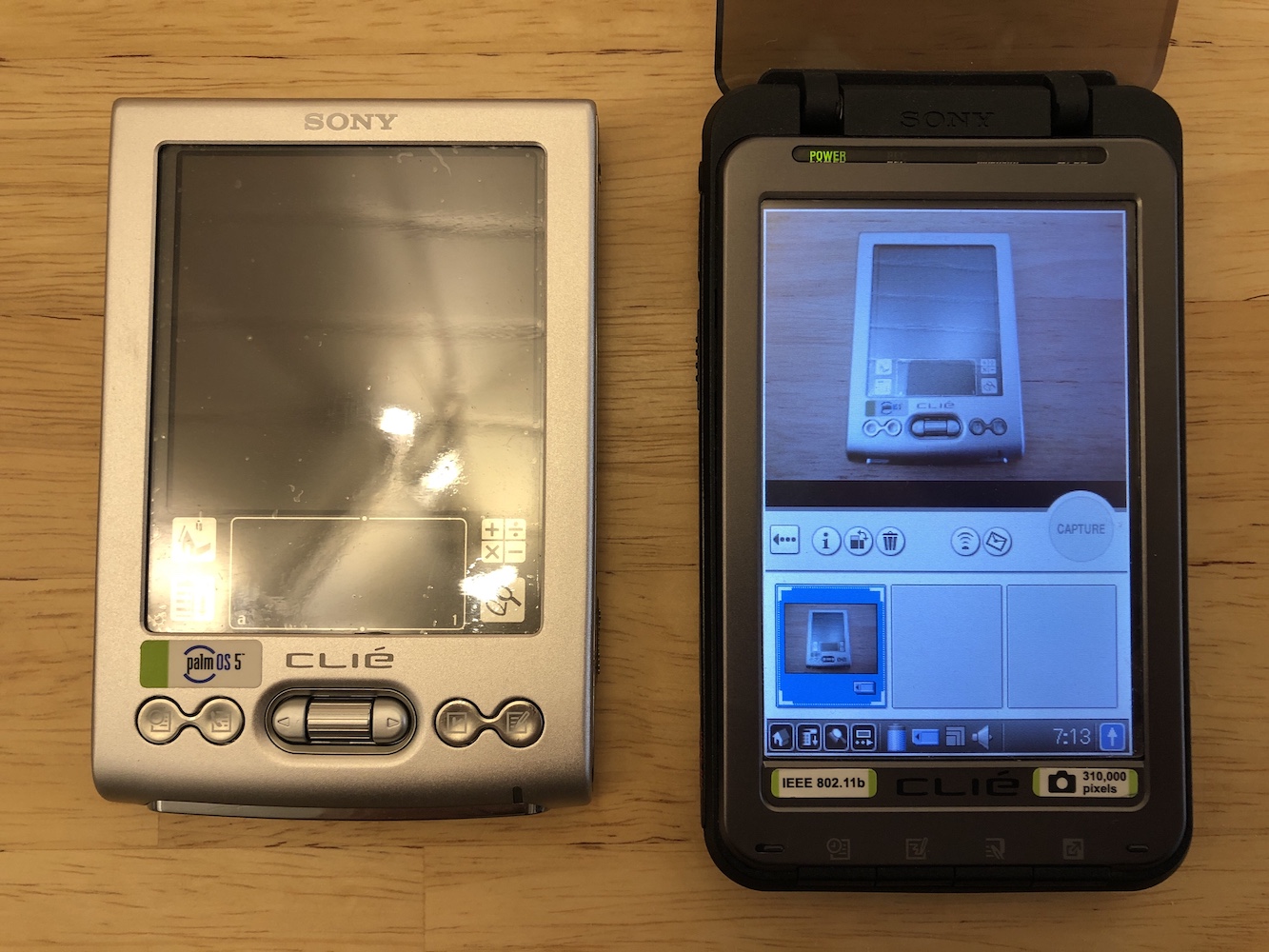 The 2GB limitation is due to the file system used. Most Palm OS 5.x devices use FAT16, which can handle a maximum of 2 GiB partitions. Fortunately Dmitry Grinberg has written a FAT32-driver for Palm OS 5 devices. It is not restricted to Palm OS PDAs from Palm, so it also runs on Sony Cliés (and probably also on devices from other manufacturers, like Garmin with their iQue 3600(a)). The FAT32-driver is freeware and can be downloaded on Dmitry's PalmPowerups Page. (It can be found under the title "FAT32".)
The FAT32 file system has the advantage, that it can handle partitions with a size of 2 TiB (with a typical sector size of 512 bytes). (The maximum size of a file is limited to nearly 4 GiB). Another bonus of FAT32 is, that it provides more caching, which is always nice.
The installation process of the FAT32 is straightforward: The "FAT32-loader-final.prc" just needs to be copied on the palm and to be executed. That's it. There is no progress bar or success-message. The only way to verify the installation, is to execute the application again. Then an error message is displayed that the driver is already installed: 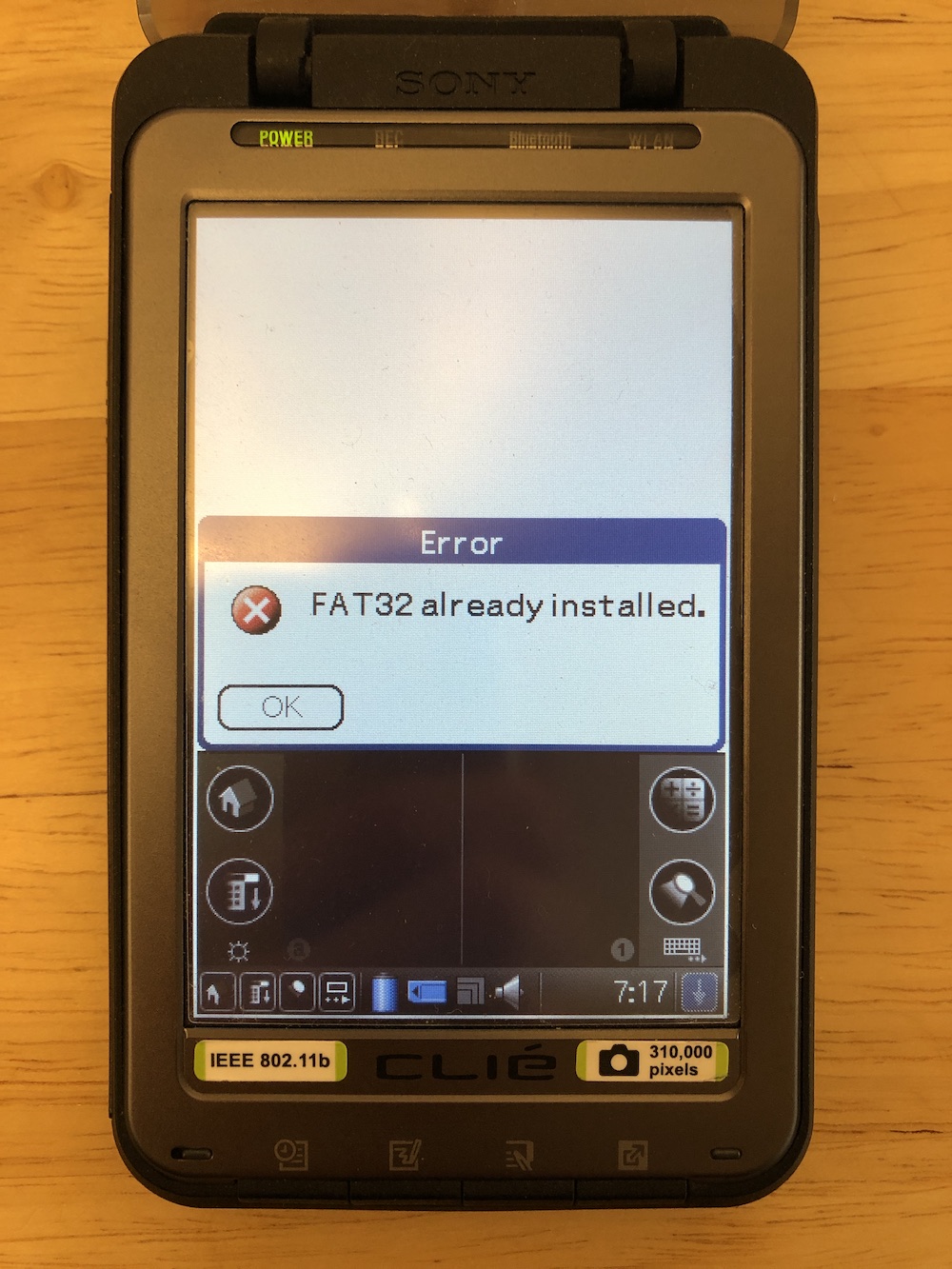 Testing with FAT32 and a 2GB Memory Stick

To test the driver, I formatted the 2GB stick with FAT32:

And, again, it got recognised correctly: 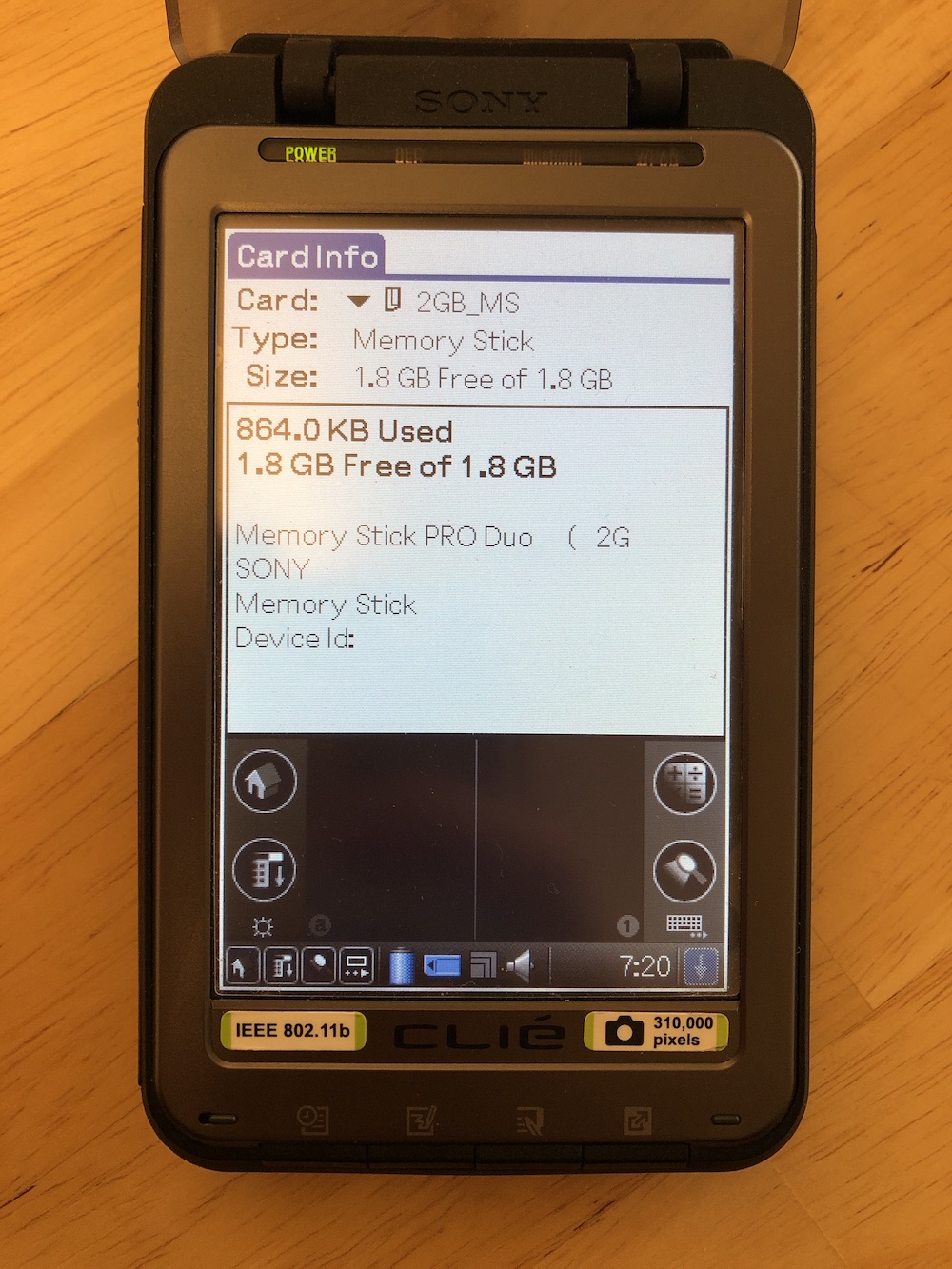 Aso writing was no problem: 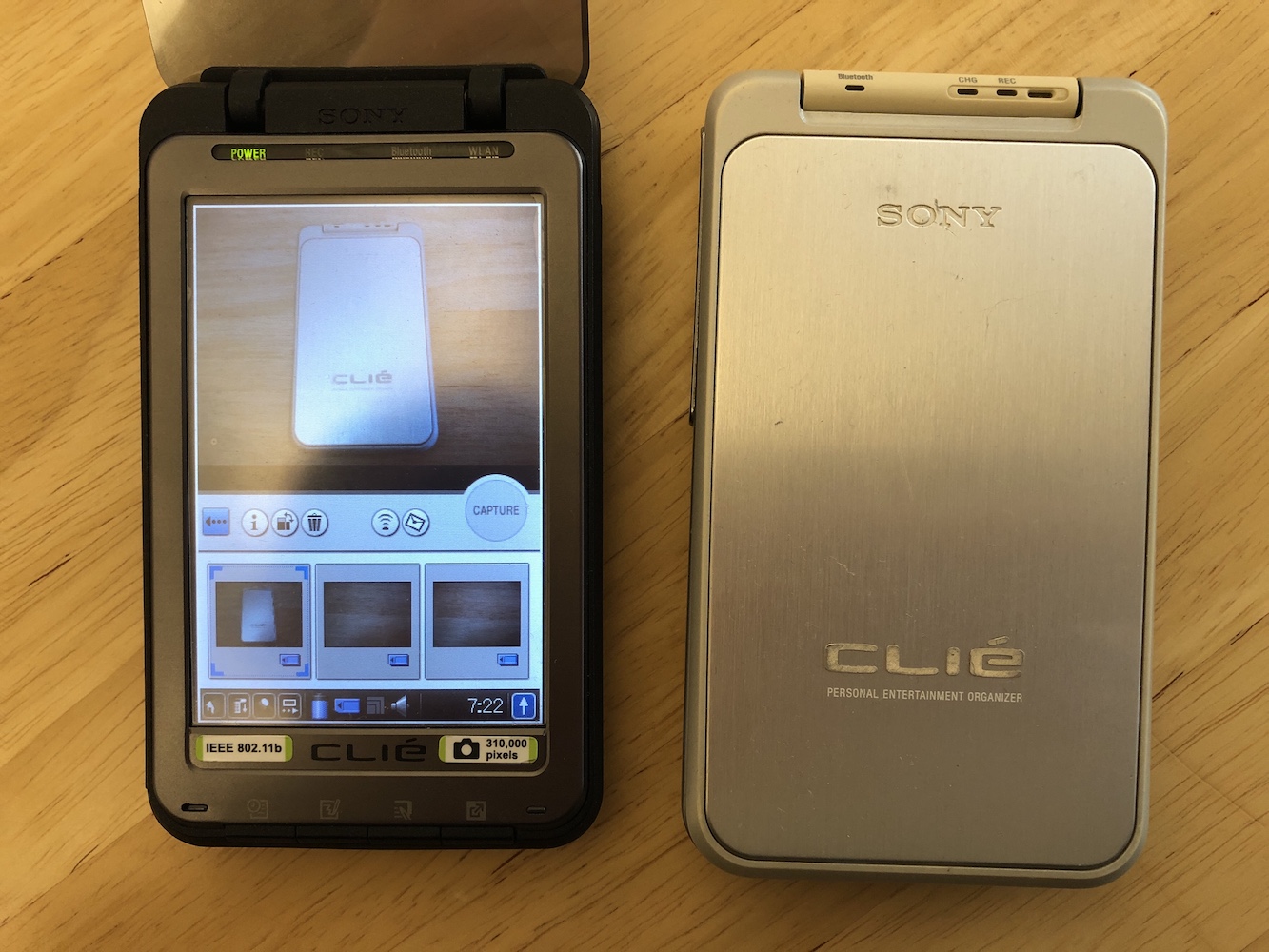 Testing with FAT32 and a 8GB Memory Stick

Of course, it is more interesting to test the driver with something bigger than 2 GB. So I ordered a 8GB Memory Stick and tested it: 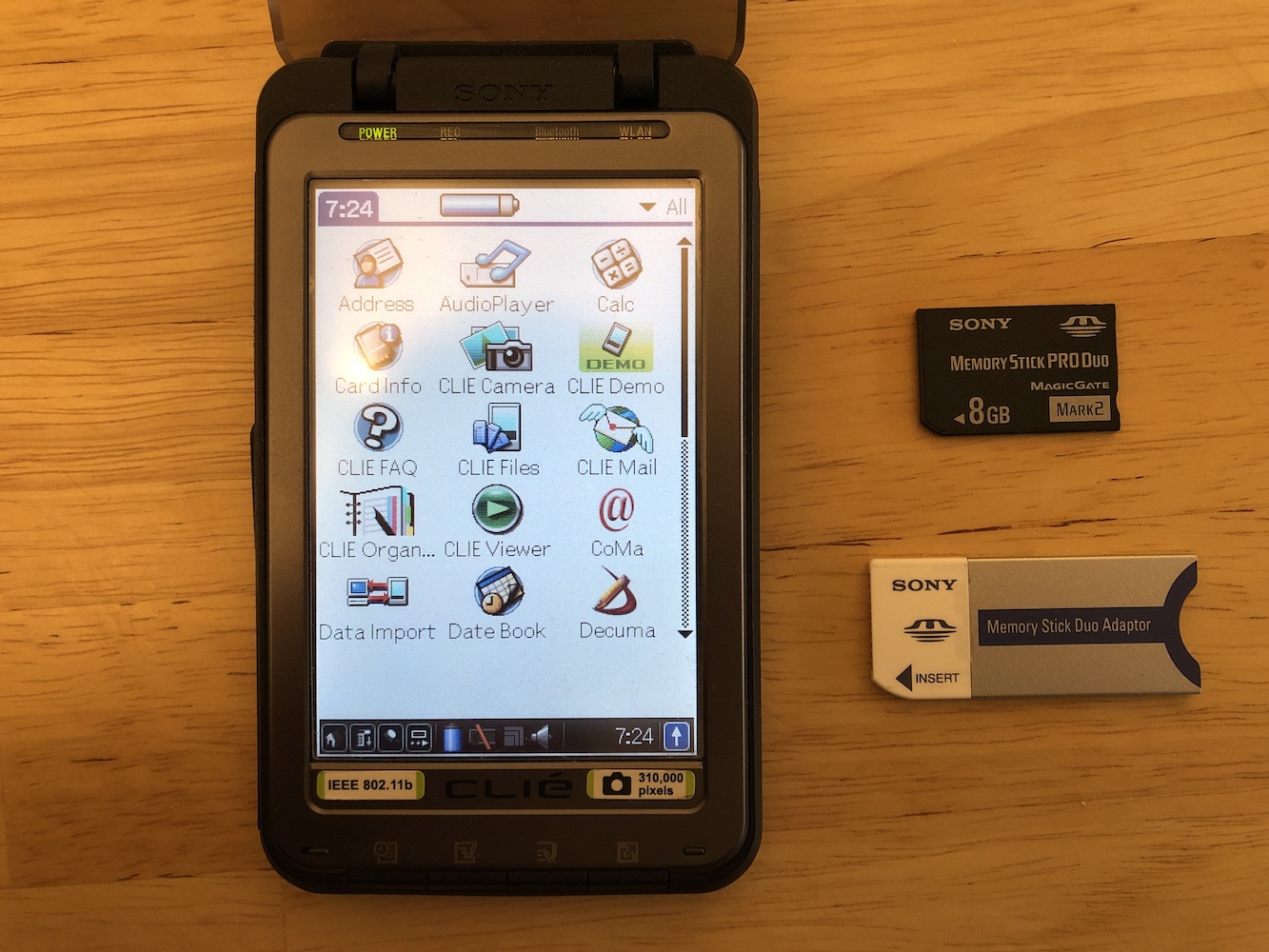 Again, the stick was formattet with FAT32 and got recognised - but only 3.5 GB of 8 GB. Like with the LifeDrive-128GB-Uprade (see steps 18 and 19) this is only a display error. It should be possible to use the full 8GB. 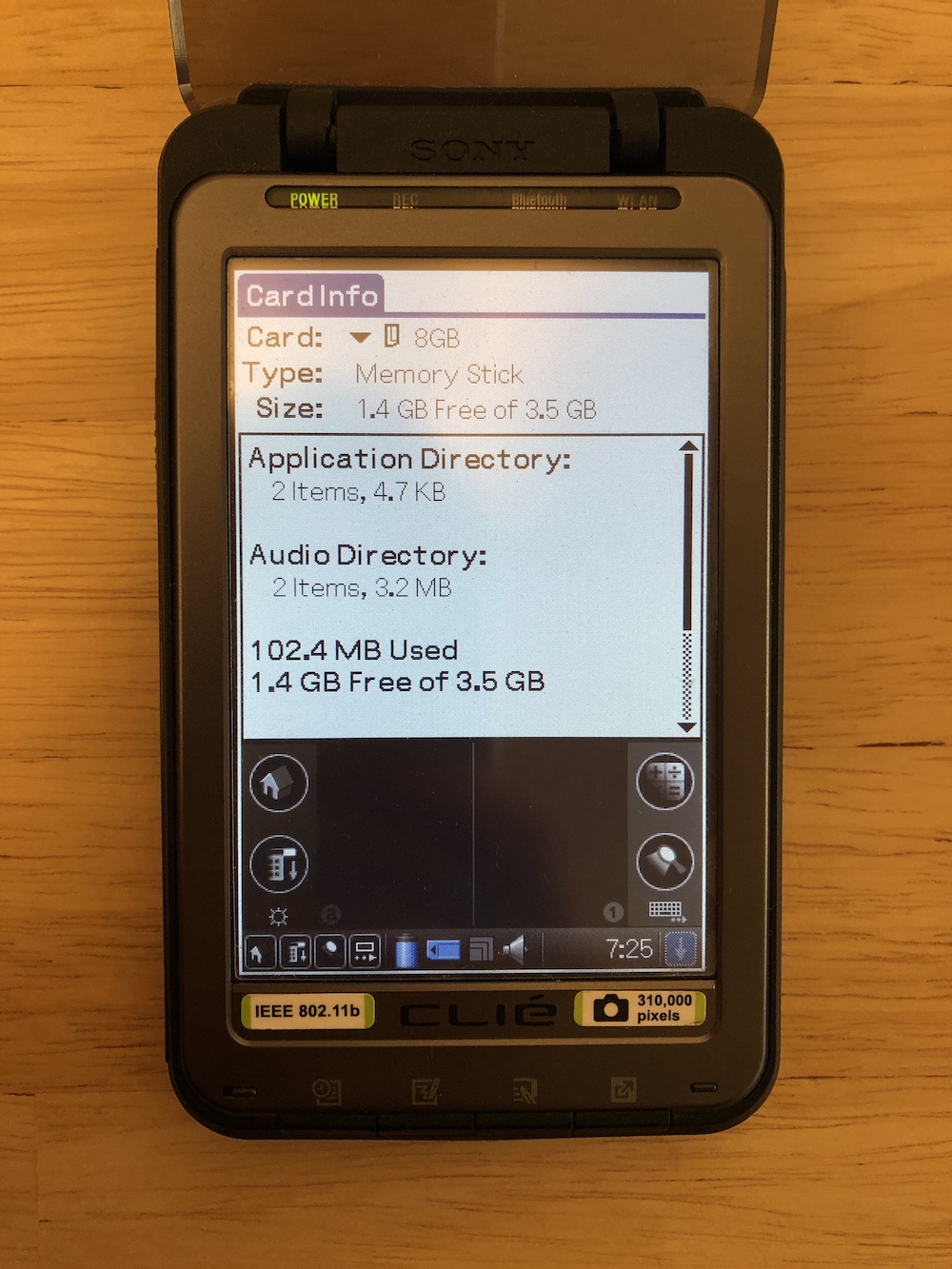 The write test was done again and a picture was saved with the camera on the stick - successfully. 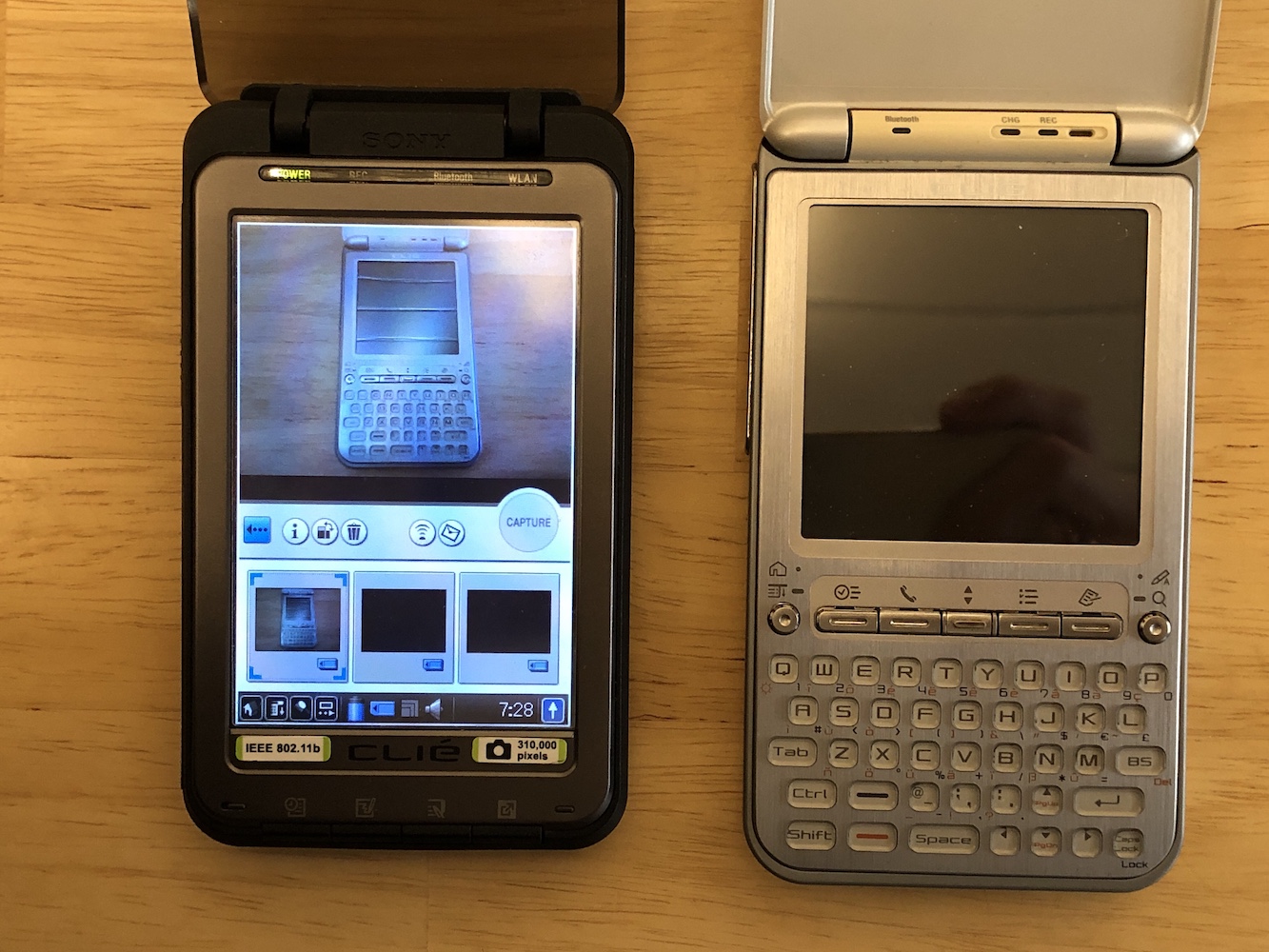 In order to be sure, that the full 8GB are useable, over 6GB of data was copied on the stick. 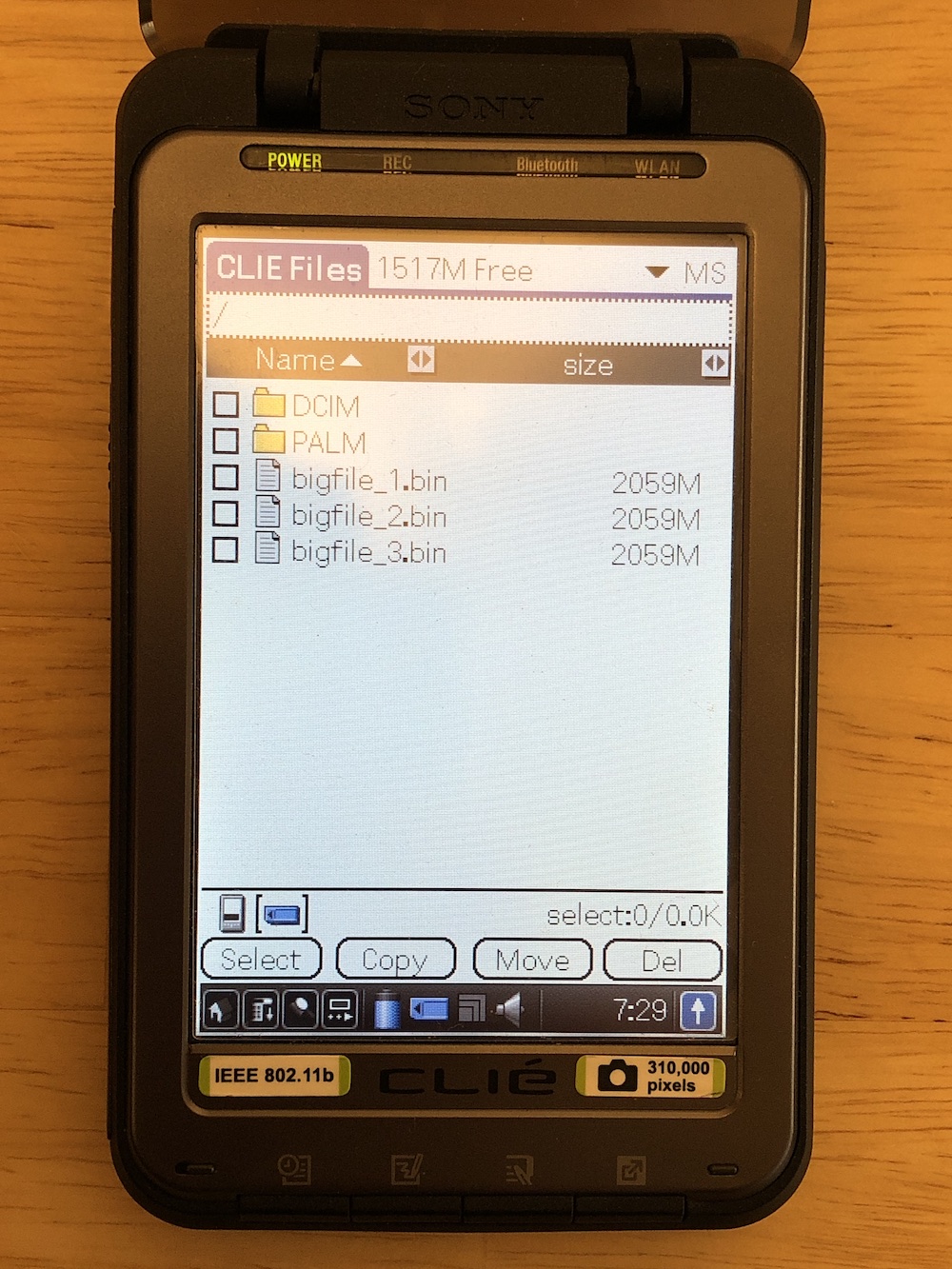 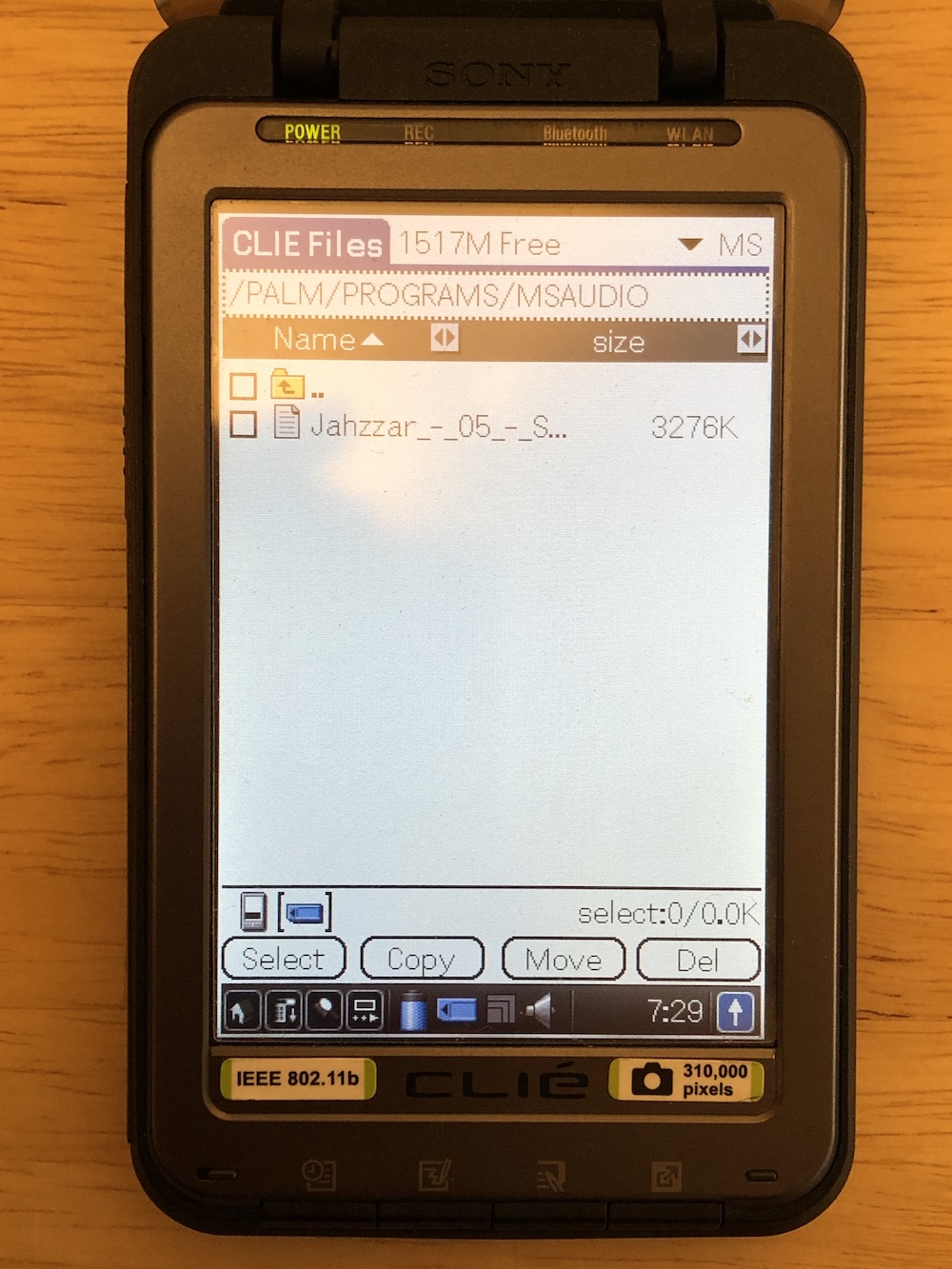 Even with over 75% used memory, the TH55 was still operational and recognized the MP3:

Btw.: If the FAT32 driver was not installed and a FAT32-fromatted stick was insert, CardInfo doesn't recognize the stick, which looks like this: 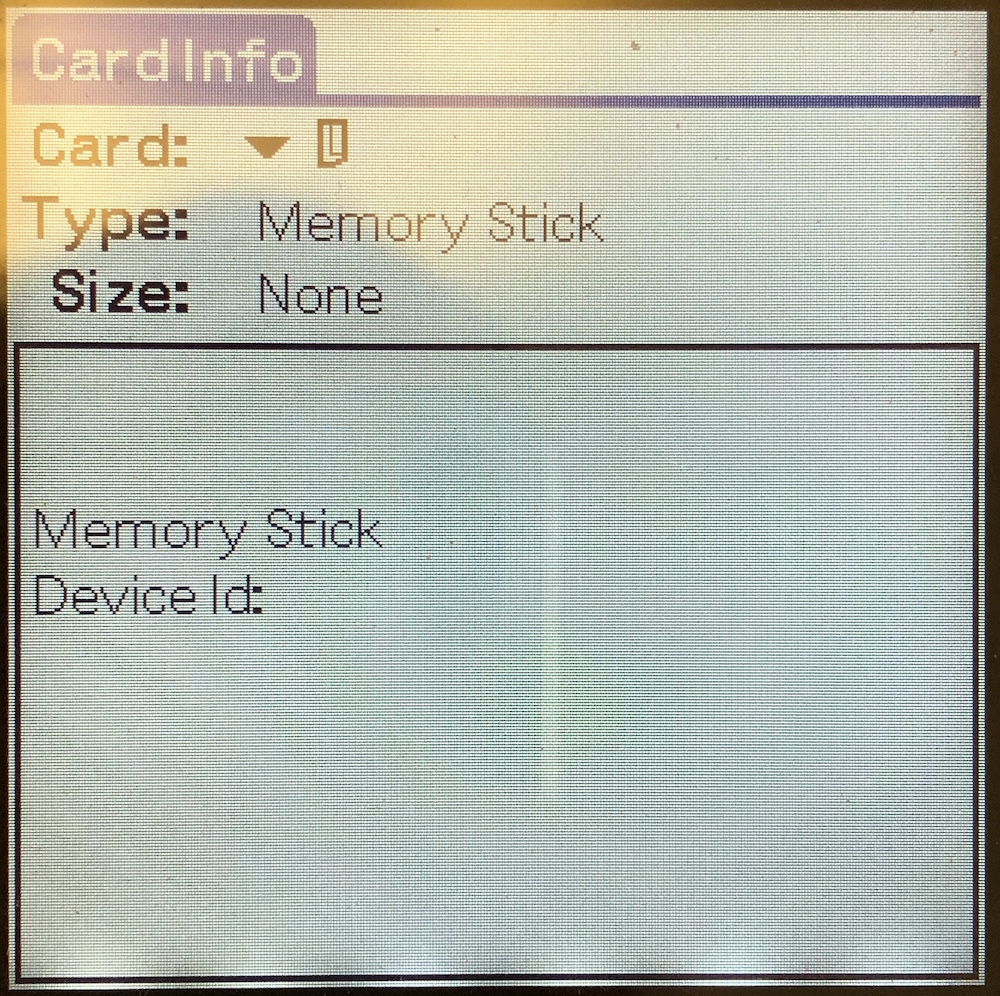 Dmitry's FAT32 driver also works with other Cliés than the TH55, like the TJ35: 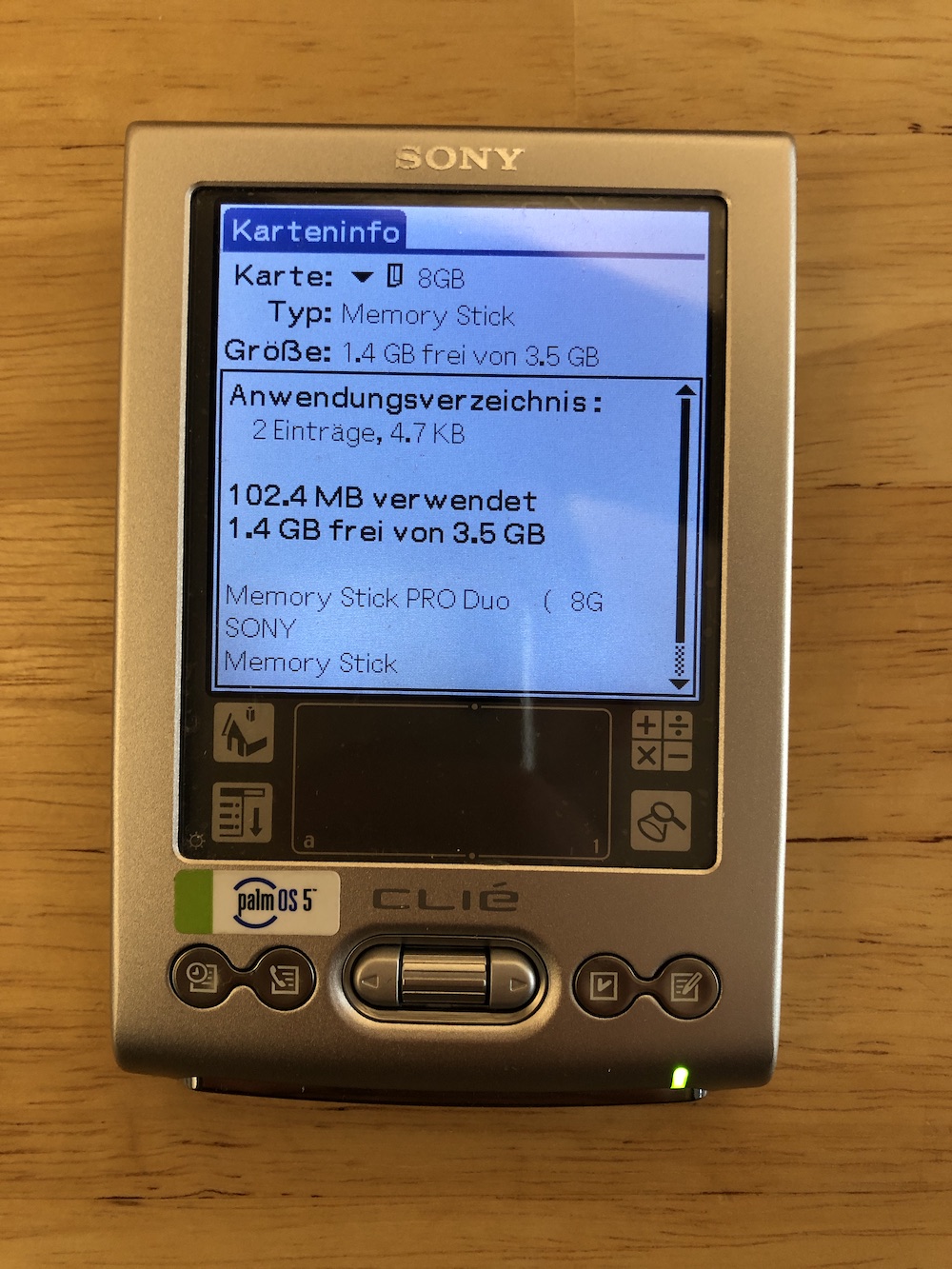 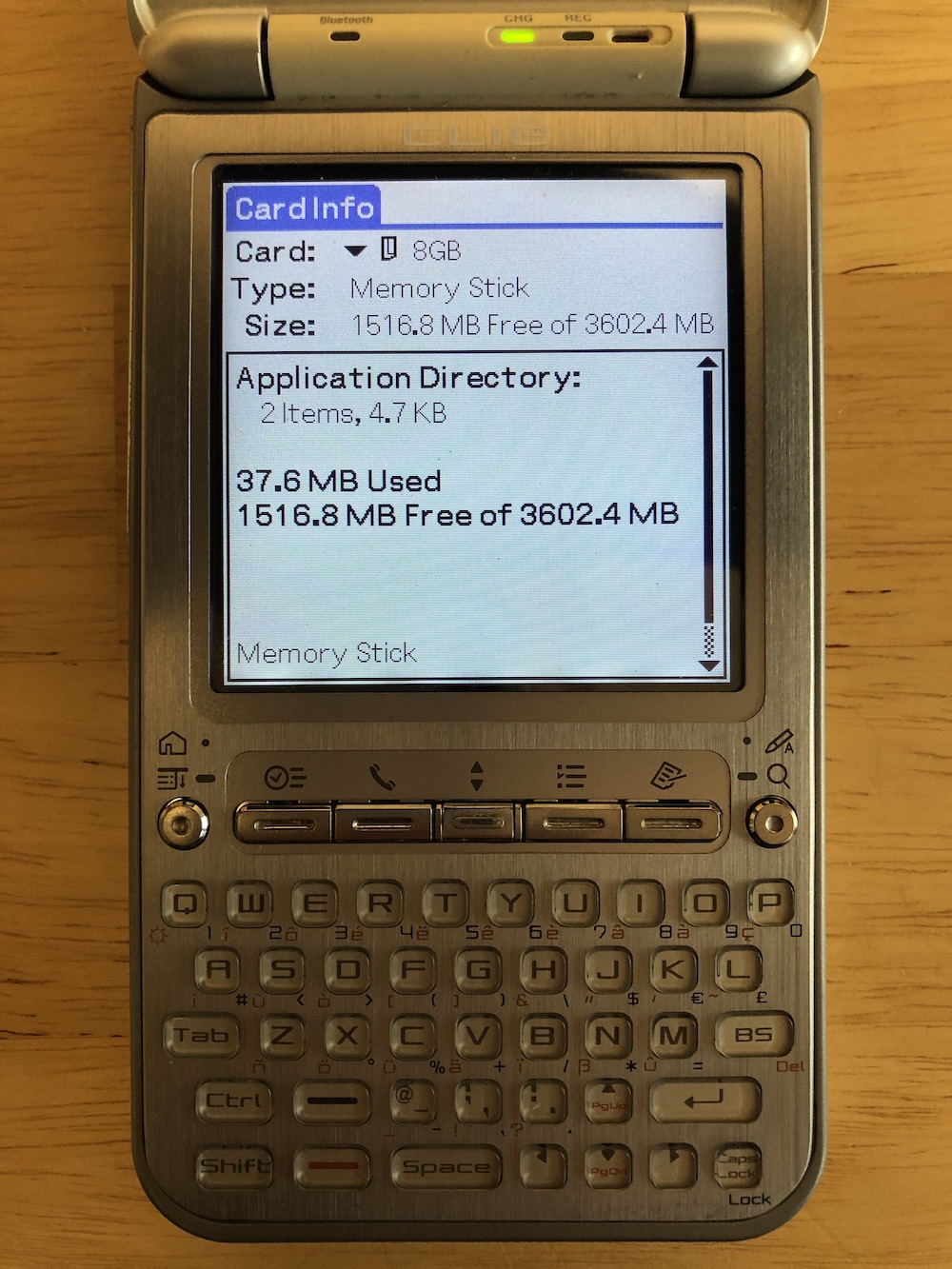 On all devices with the same display error regarding the memory size. But luckly it is just a comsetic error. And there is at least one disadvantage of FAT32: it is slower than FAT16, if the "File Allocation Table" is bigger than 1MB. Especially on such small devices, like a PDA with relatively little CPU power you can feel this. For example, when the card is inserted, the device needs a few seconds until it is available. MP3 players, such as the built-in "AudioPlayer" will hang (or take an extremely long time to load) when you try to play a MP3-file on a FAT32 stick. PocketTunes doesn't let you fast forward and rewind properly. Only the AeroPlayer worked fine.

Now it would of course be extremely interesting to know whether the latest Sony Memory Stick Pro-HG also works in Palm OS 5 Cliés. Because these are available with up to 32GB, but that would be something for another article.

Pushing the limit even further 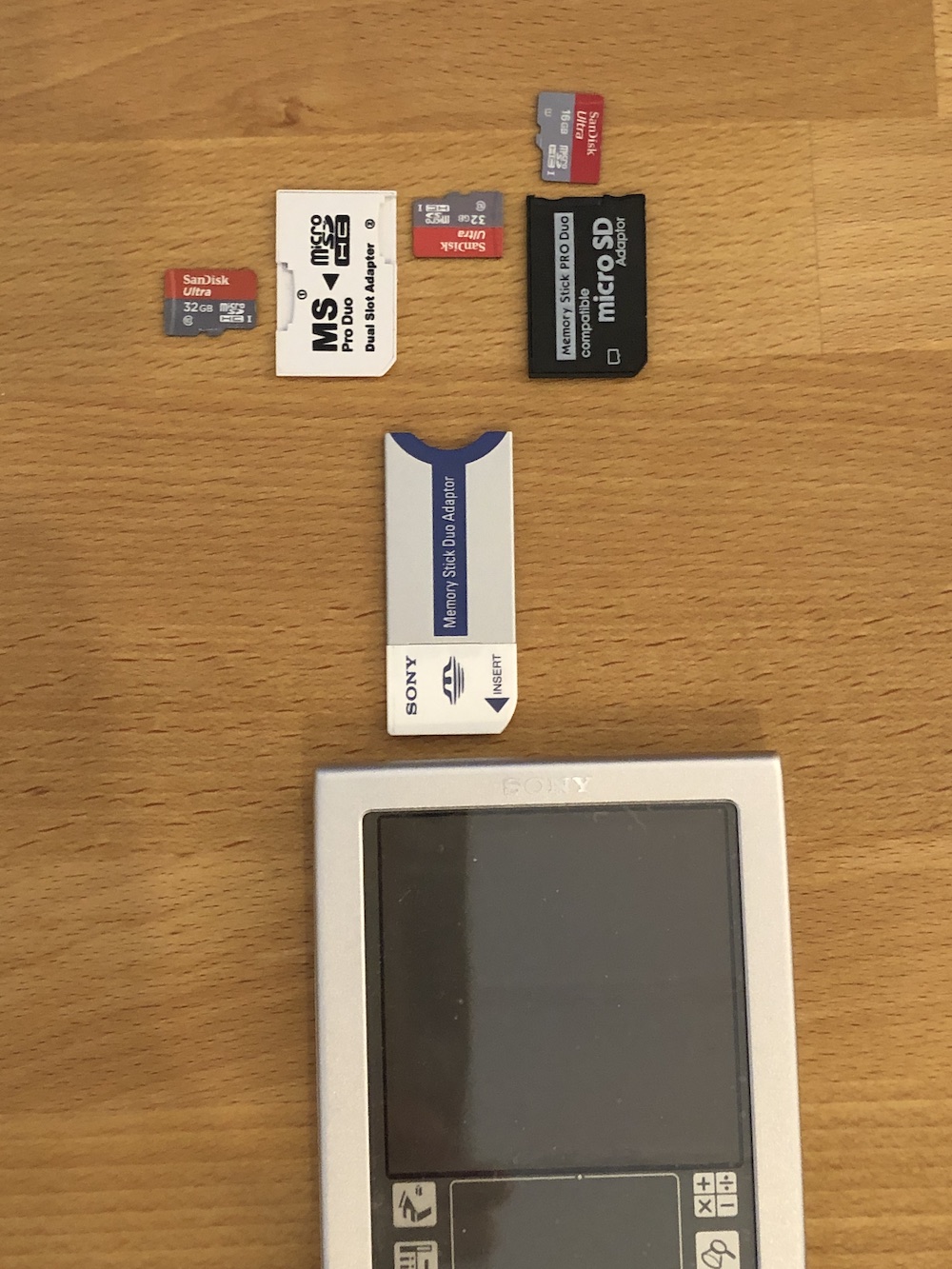 After posting this article on reddit, user "prestelpirate" was able to test a Sony Memory Stick Pro-HG successfully in a Sony Clié TJ25 or TJ35. He or she was also able to test a MicroSD-to-Dou-Adapter successfully: Behold the horror

In the meanwhile I was able to confirm this test. Besides a white dual-slot adapter, there is also a black single-slot adapter for using MicroSD cards as Memory Sticks (Dou). Both adapters only works with none-HHE-devices! The Sony Clié UX40/UX50, TH55 and VZ90 have a "Sony Handheld Engine" processor, which does not handle the MicroSD/Duo-Adapter very well. So these devices only work with real Memory Sticks. All other Cliés with Palm OS 5 had no problems with these adapters. (Tested with a TG50, NX73V, NZ90 and TJ35.)

Note: If you are using the withe dual-slot adapter, you have to format both SD-Cars as FAT32 in the adapter! If you format the cards one by one and put them in the adapter afterwards, only slot 1 is recognized! But it is possibe to use different sizes in both slots. (Tested successfuly with 16GB and 32GB MicroSD-Card.) If the Memory Stick Pro-HG is working with HHE-devices, was not covered by the tests.