Powering a Palm m100 with a LiPo battery

The Palm m100 or m105 are PDAs, which run tipcally with two AAA batteries. Each battery has a voltage of 1.5V. In this case the batteries are connected in series, so the total voltage is 3V. A boost regulator transform these 3V into 3.3V, which then powers nearly the hole the system. For this project it was initalied planed to connect a microntroller to the Palm and it should be powered with a rechargeable battery. So why not powering the hole Palm with a rechargeable battery? The idea regarding the microcontroller was discarded relatively quickly, in order not to make everything too complicated. Therefore, only the idea of supplying the Palm with a lithium polymer battery was left.

A lithium polymer battery supplies up to 4.2V when fully charged. When it is empty and should not be damaged, it only supplies 3.6V. So, given is a 3.6V - 4.2V input voltage range (compared to the 2.0 - 3.0V range of two AAA batteries). In addition, a boost regulator regulates the usual 3V to 3.3V. And an analog-digital converter measures the input voltage, which then gets displayed on a battery statusbar in Palm OS.

So first of all it was necessary to locate the boost regulator. Some kind Reddit-Users helped me with this, so I soon knew that this was the voltage regulator: 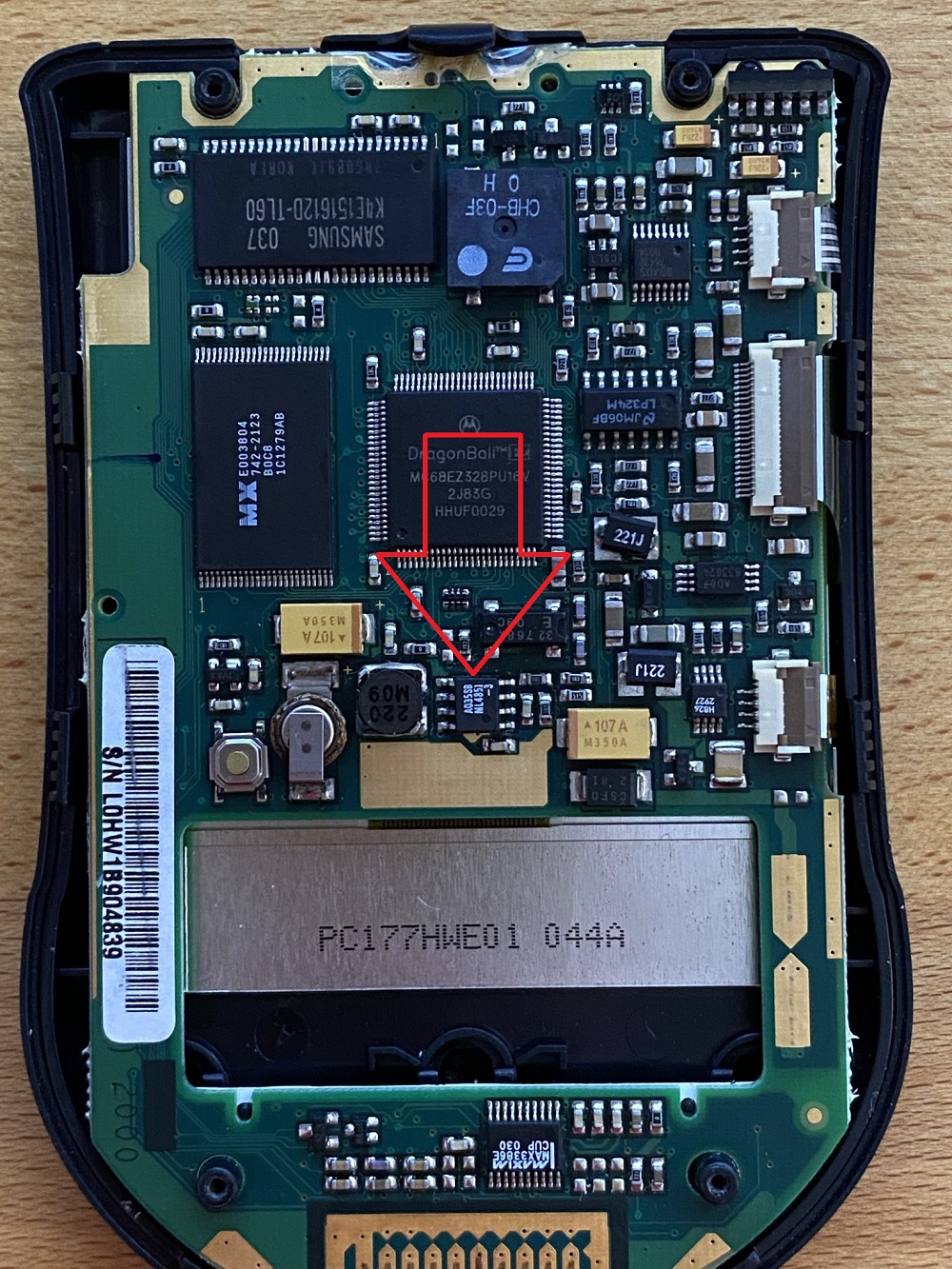 A ML4851-3, which has a maximum input voltage of 3V. Using it to regulate the 4.2V/3.6V of the LiPo was not an option. A reddit user suggested to me to use a LDO (Low dropout regulator). So the idea was to use a LDO to regulate the 4.2V to 3.3V and bypass the boost regulator. Since I had only a 3V LDO and the used components are fine with a 0.3V voltage difference, I replaced the boost regulator with the 3V LDO. Fortunately, also the Motorola CPU used, can, according to the data sheet, be operated with a voltage deviation of +/- 0.3V. 3.3 is the "standard" voltage, so 3V from the LDO is still within the limit.

The second step was to measure the voltage of the different pins of the original boost regulator. There were 3.3V on the "Rest" pin and on Vout. GND, of course was ground and Vin needed the 3V input voltage. 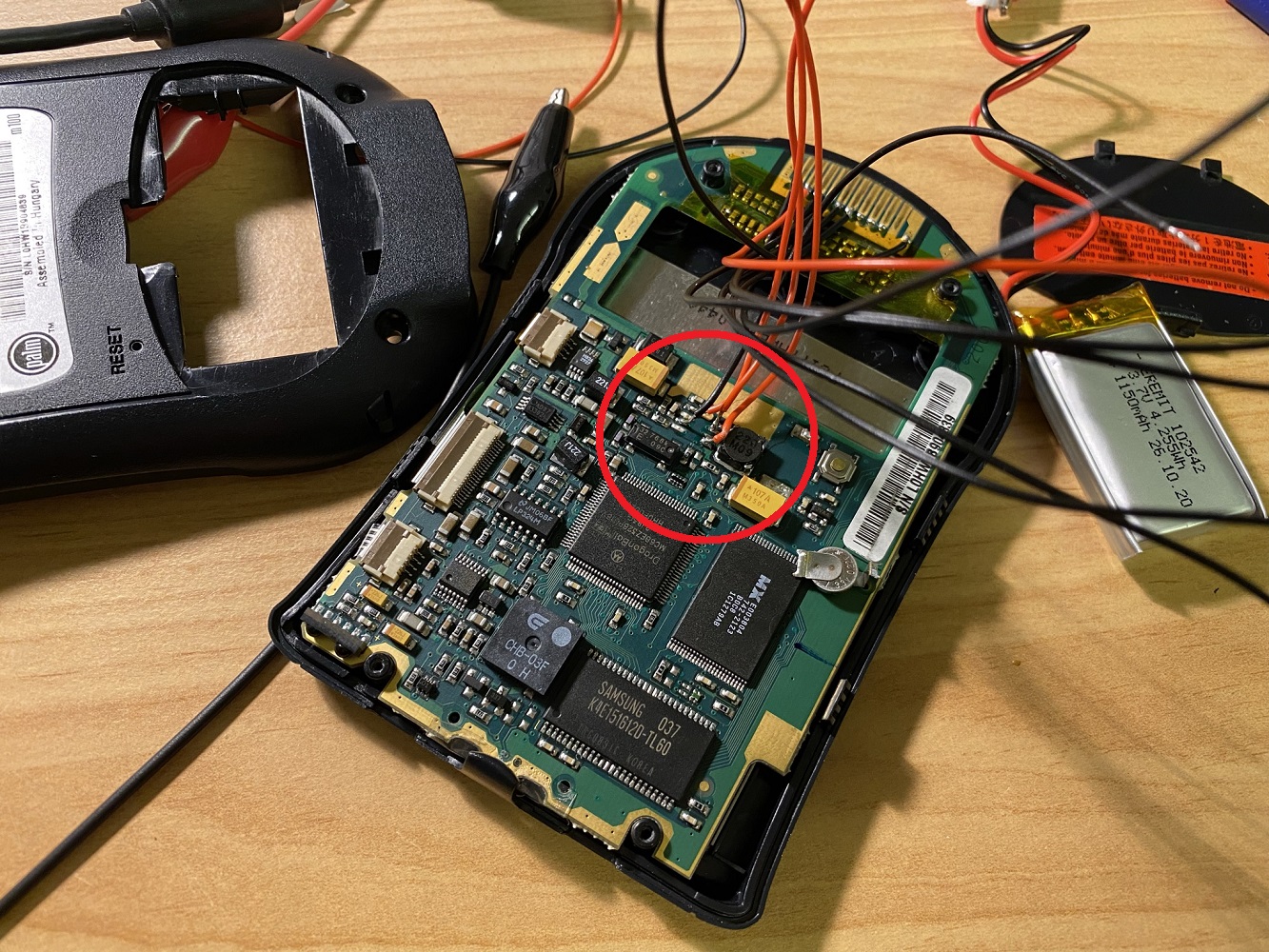 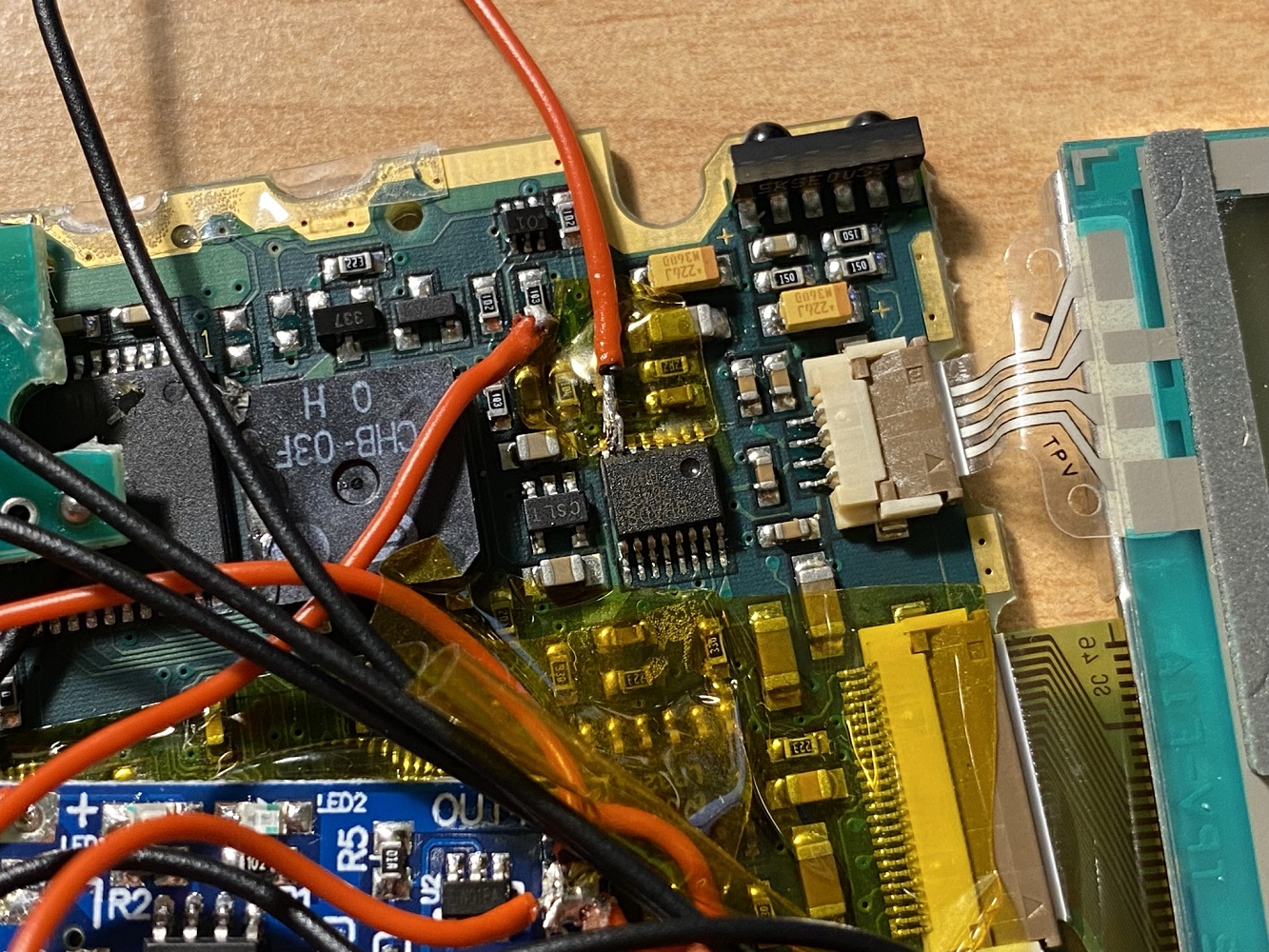 (The red wire next to resitor "103", was only soldered in for testing purpose and got removed later.)

Last step, after some testing, was to put everything together. For charging the LiPo battery I'm using a "TP4056" charing module. With a standalone micro-USB-port on a PCB, I was a bit more flexible for placing the port: 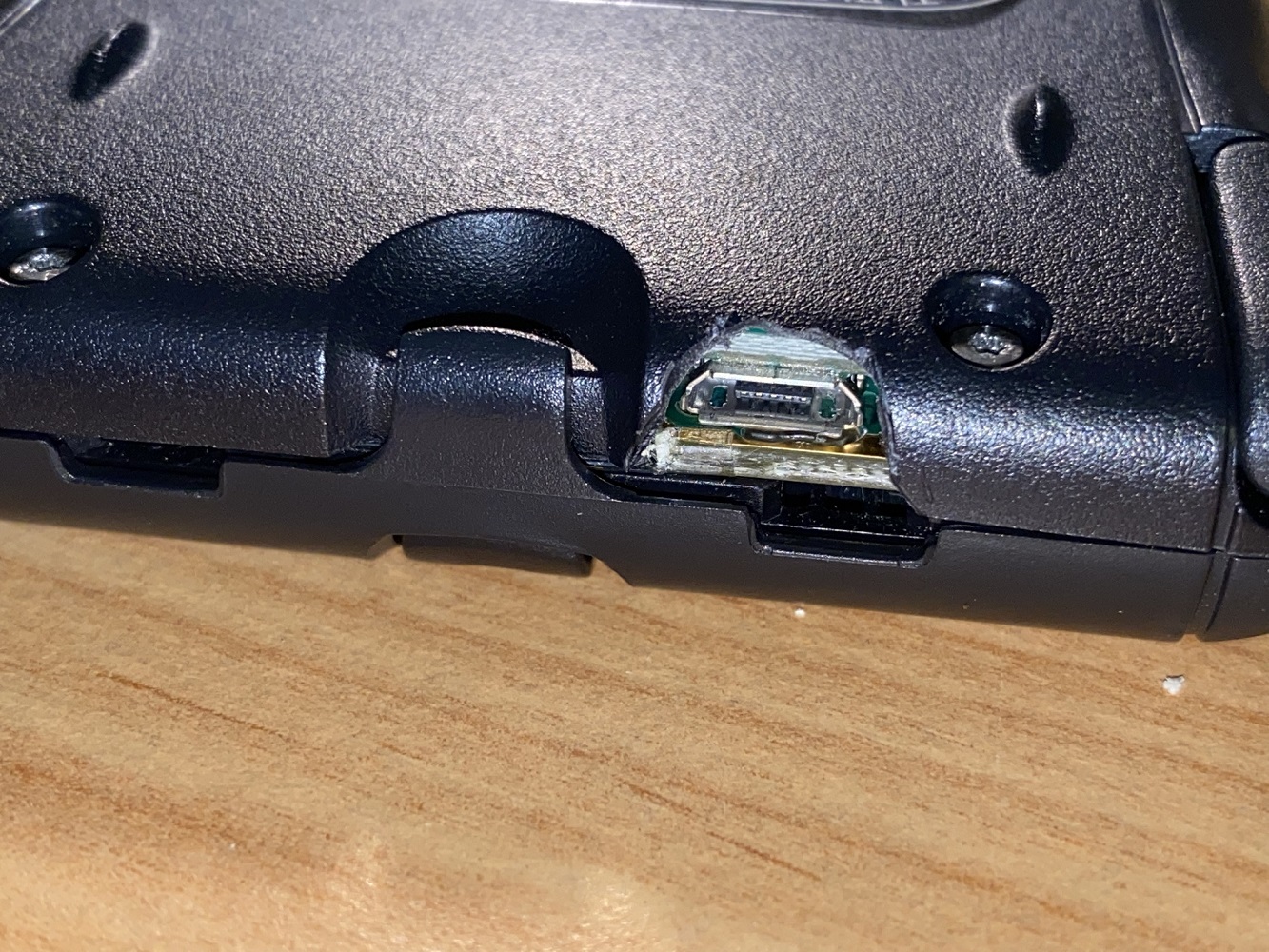 After some trimming of the Palm m100 hosing, isolating everything with kapton tape and soldering some wires to the TX and RX pins of the docking-connector for some futrure projects, everything was ready for putting back togther. Luckily everthing fittted in the m100 housing: 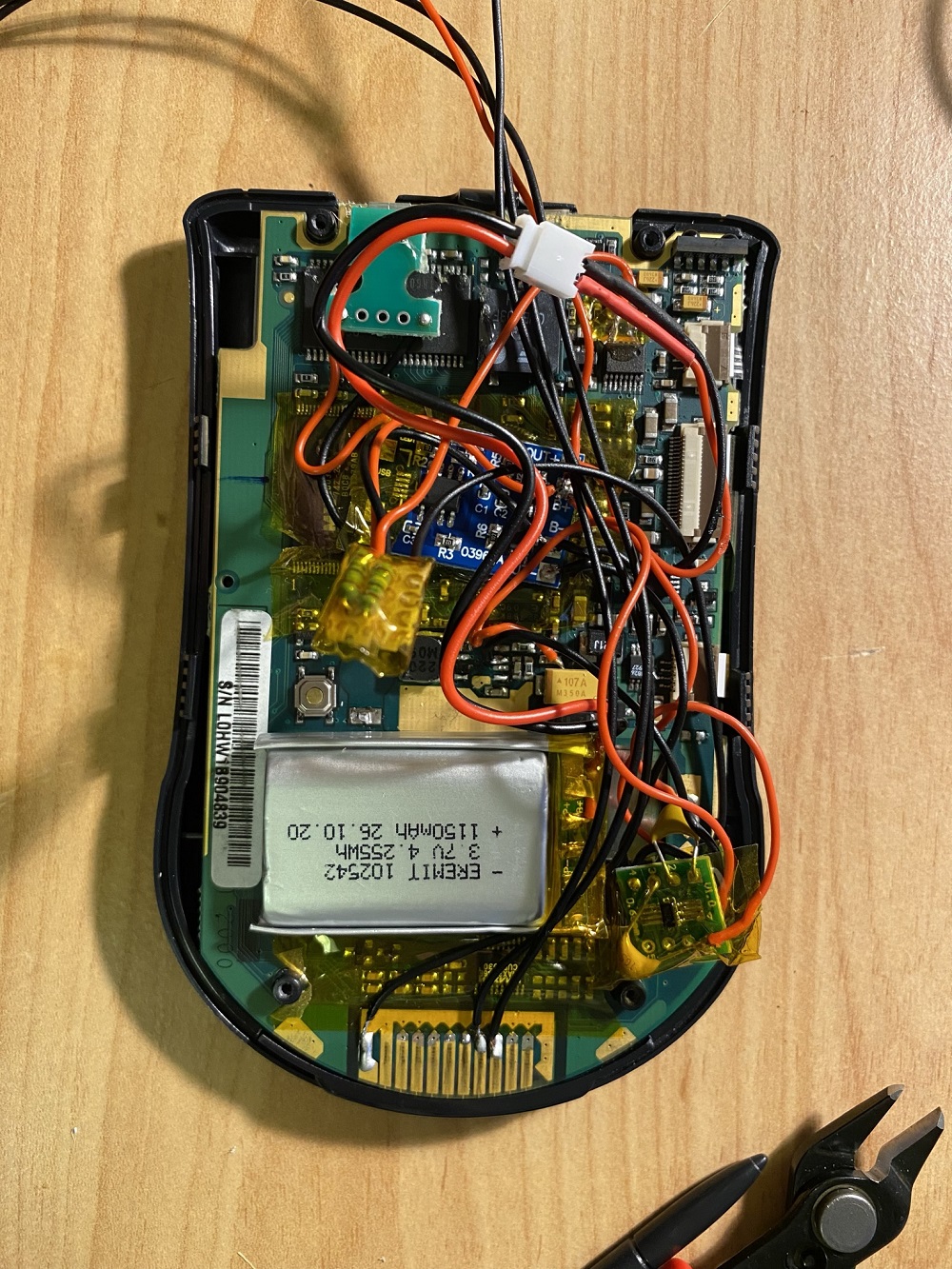 When the backlight is on and a stresstest was running, the complete system consumes only 72mA, which is just fine for the LDO, which can provide upto 200mA. So everything looked fine. But unfortunately after one week of standby for the Palm m100, the Lipo battery was completly empty. So hopefully I'm able to publish an update with a fix soon. But so far, I want to thank the discord users "dmitrygr" and "jercos" for their help and support.

And this is the final modification (for now): 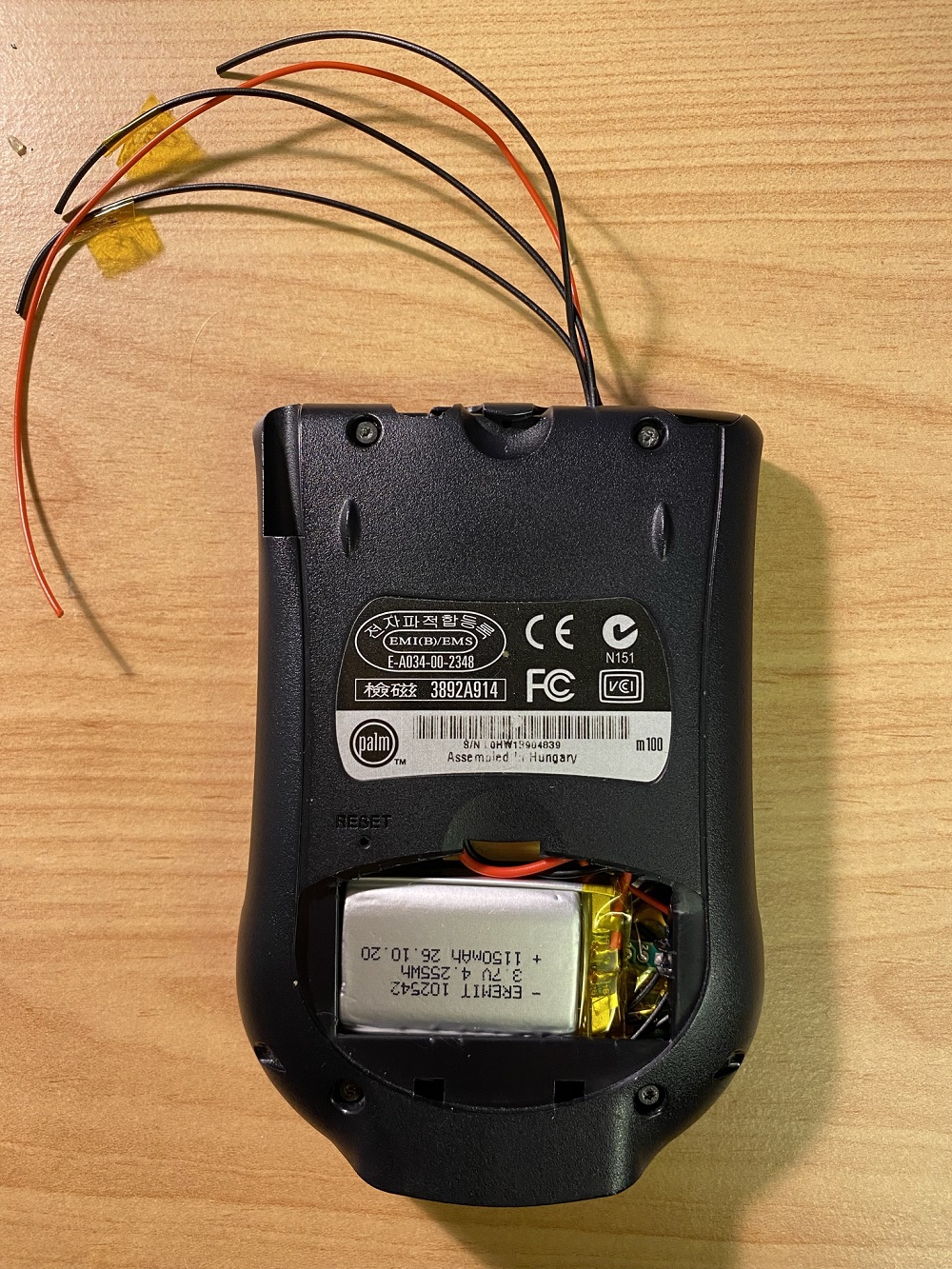 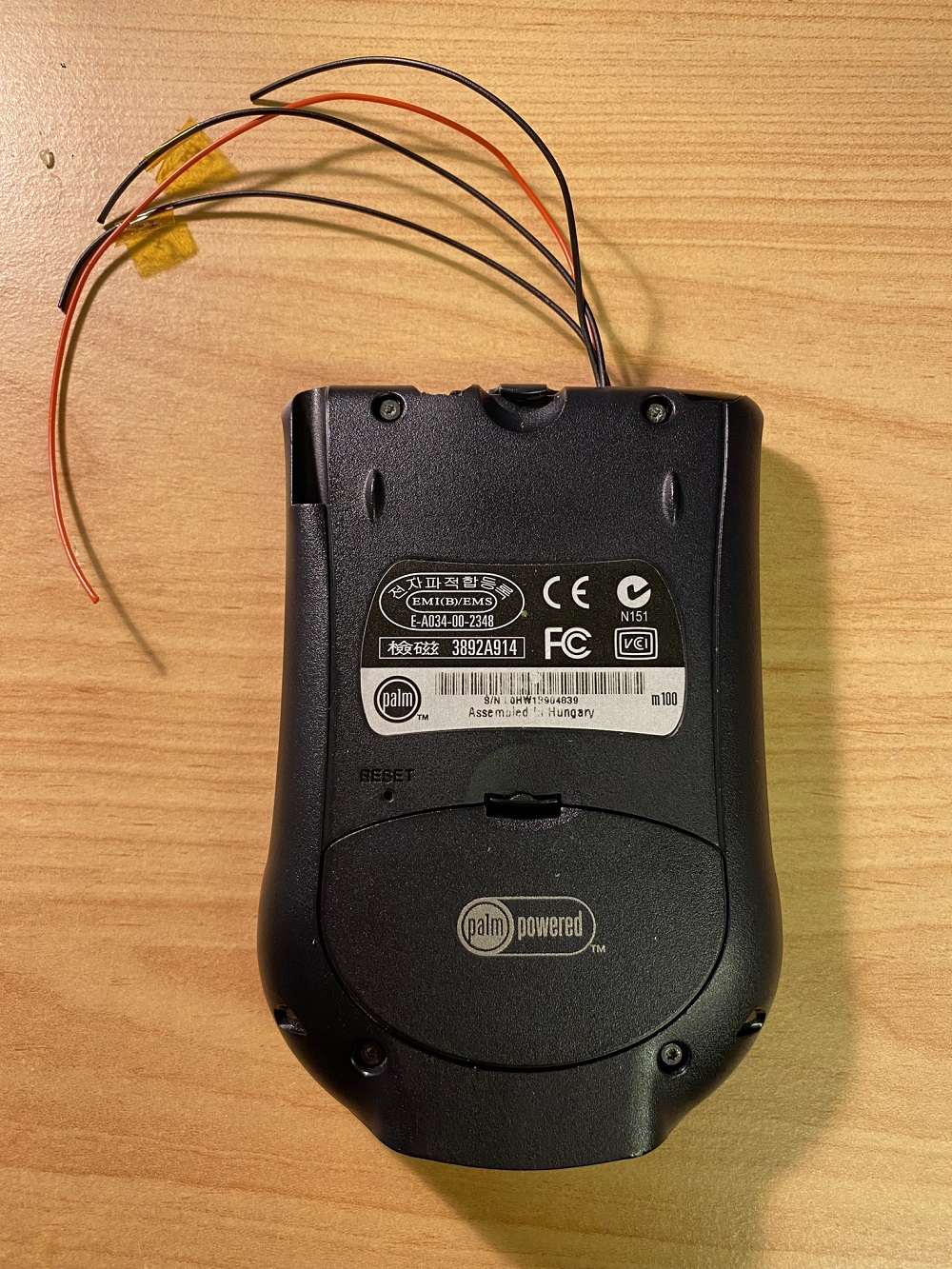 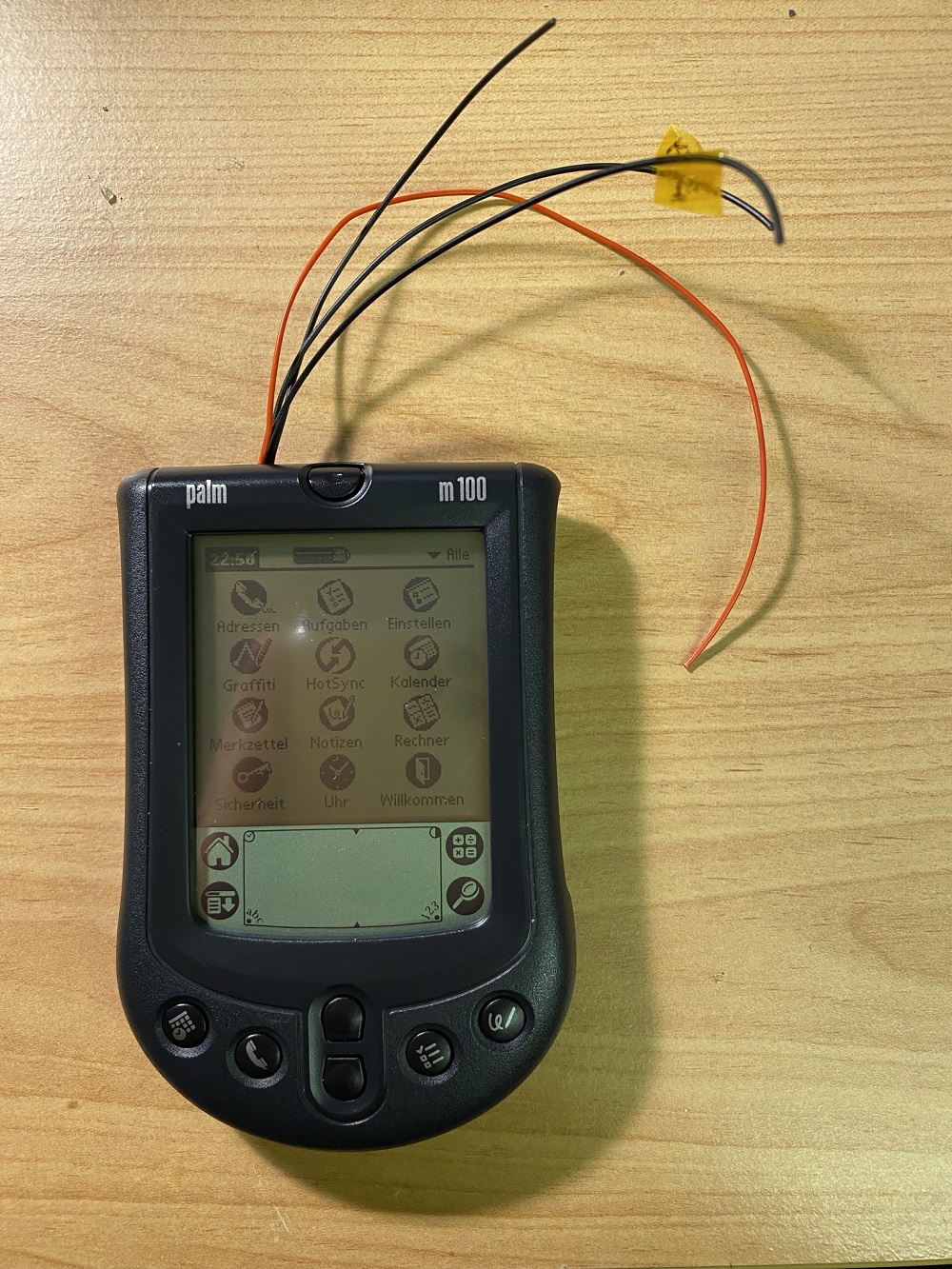