Fixing the backlight of a Palm Vx

Caution: I won‘t take any responsibility for any damage!

Hint: most images can be enlagred by downloading or opening them in a new tab.

The Palm Vx is a nice little device with some features, which were not really new but nice-to-have at the time, when it got released:

8 MB Ram for data and programs, was quite a lot for that time. Also the 20 MHz was a small boost, compared to the usual 16 MHz in other devices.

Unfortunately, some devices have one major problem: the backlight does not work. Moreover, the battery drained faster than usual. The problem is caused by a faulty lamp-driver-ic. Some sites suggesting to remove this IC, to solve the draining battery problem. But his solves just one of two problems.

After getting one of those Palm Vx with a not working backlight in my hands, I decided to replace the IC with a new one. In my case the IC had the label “H826 1220”, but a second Vx with a working backlight had the IC “H826 1061”, so the second part of this label should not be this important. After searching the web, I found out, that the IC is a “MSOP8” hosing and the name of this IC is “HV826MG”. An eBay-Seller offered 15 pieces of “NEW HV826MG SUPERTE D/C:07+ MSOP8” for around 5€. (The ICs were labeled as “H826 7342”.) I ordered them and after a few weeks they arrived. (The case of a Vx can be opened with a hairdryer and some flat plastic-chips, which can be put between the housing and the frame to get the back carefully off the Vx. - Be careful, the backframe can be very hot!)

The mentioned IC is located on the right side underneath the right (display?)-connector: 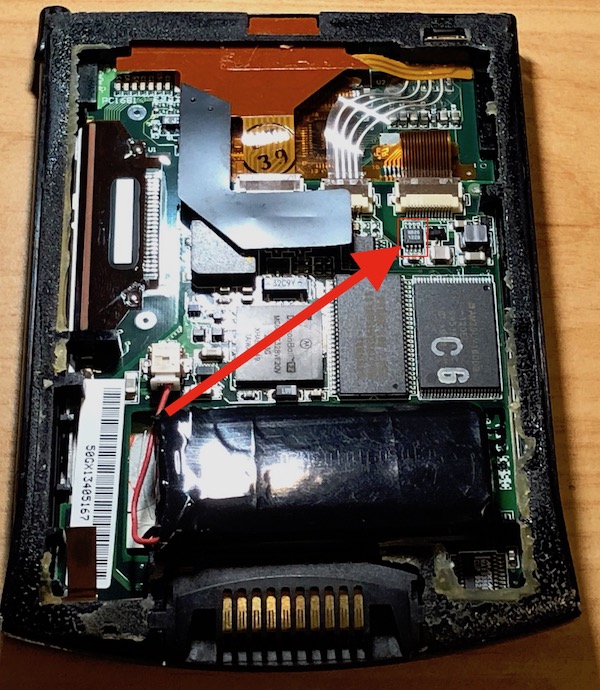 I removed the IC with some flux and desolder: 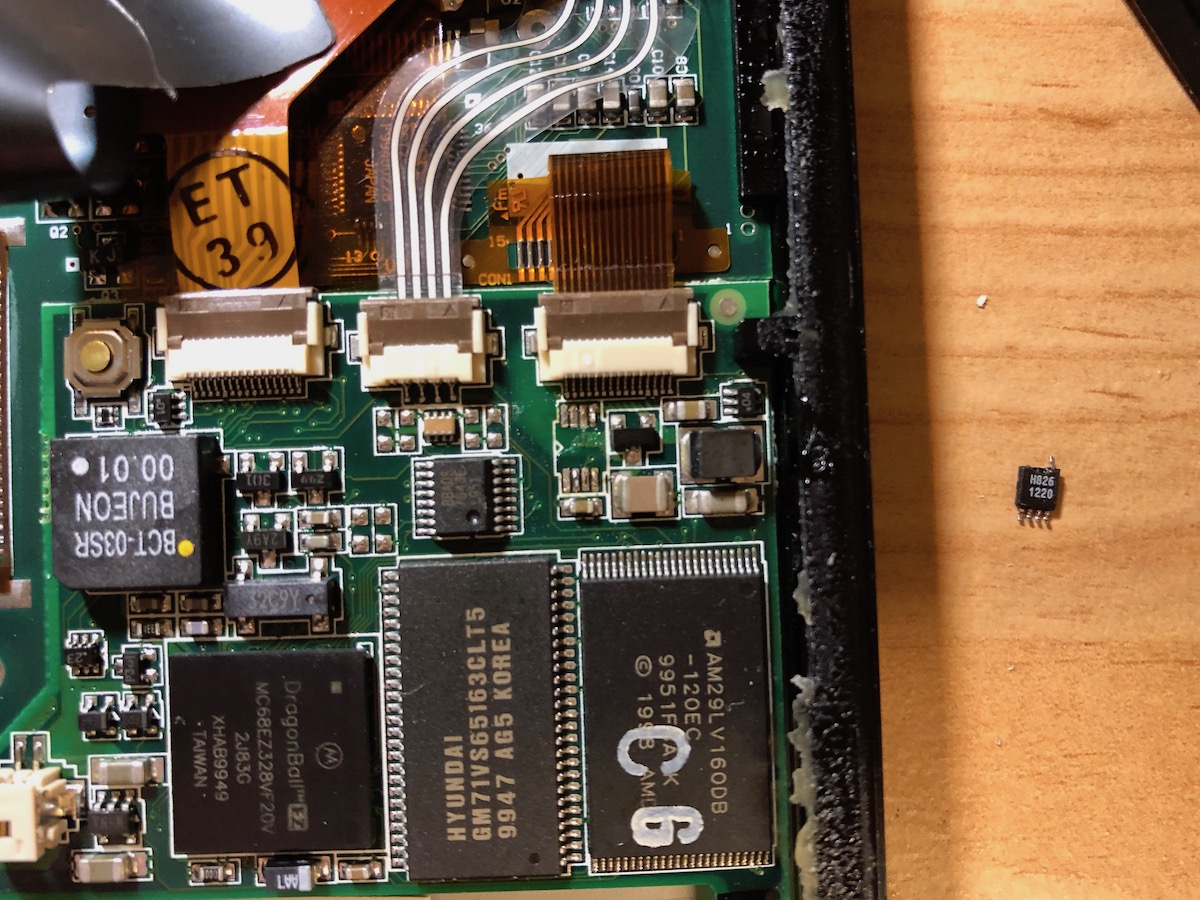 After putting the new IC in, I soldered it onto the board and removed the solder bridges with desolder: 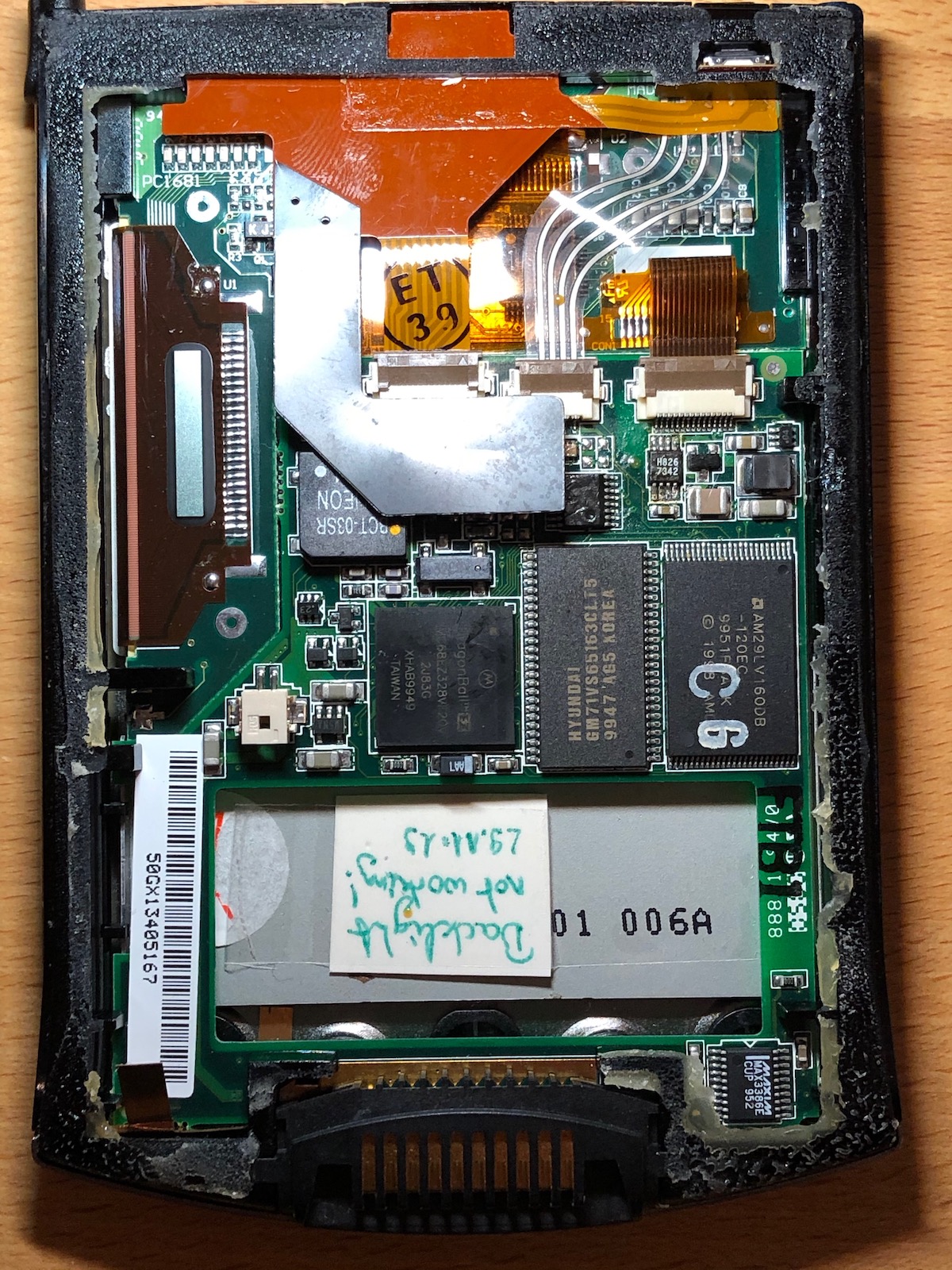 I admit that it is not the most beautiful result but it works: 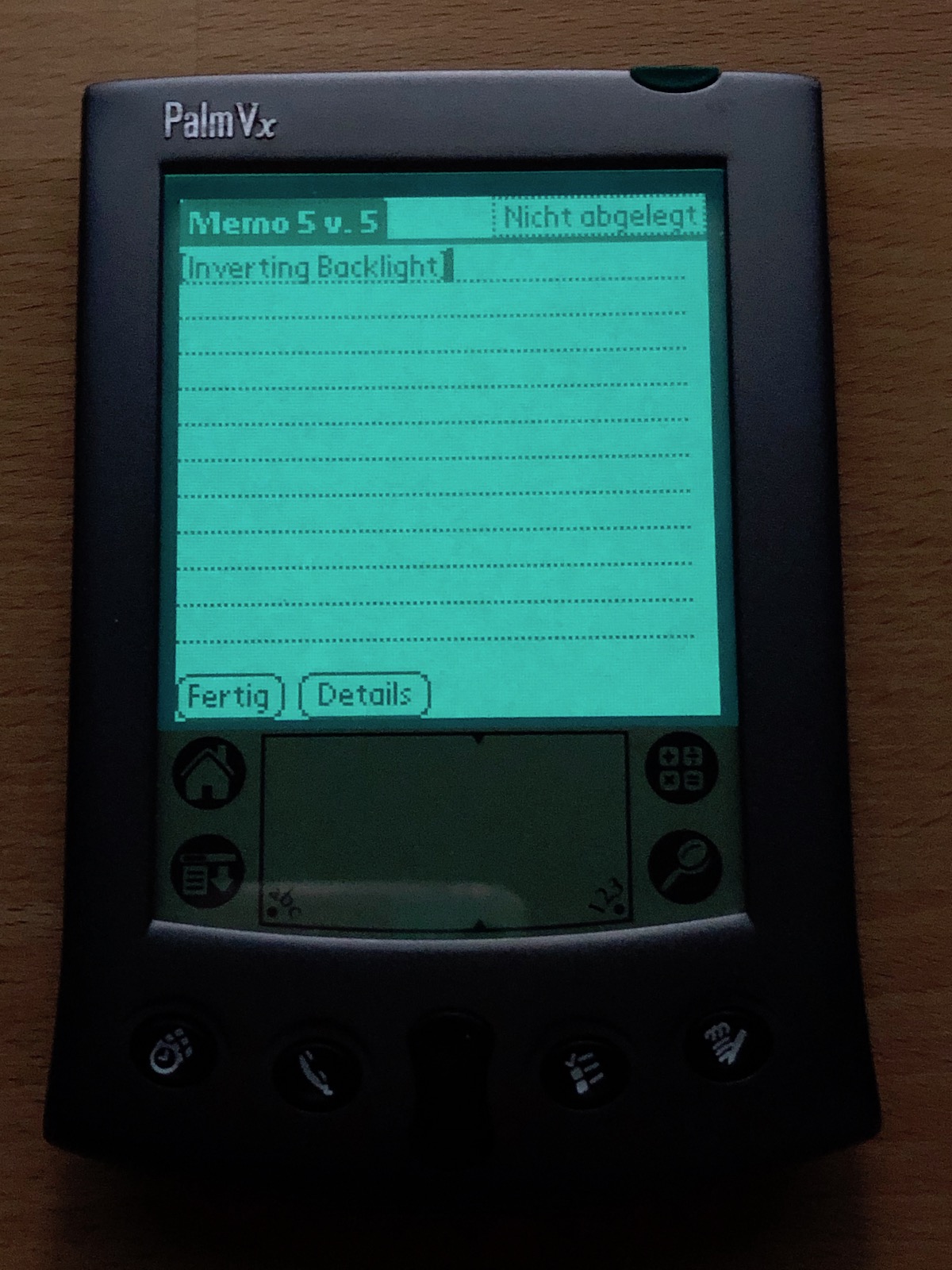 If you want to check the IC, here are the voltage values (compared to ground) of a working HV826MG-IC: 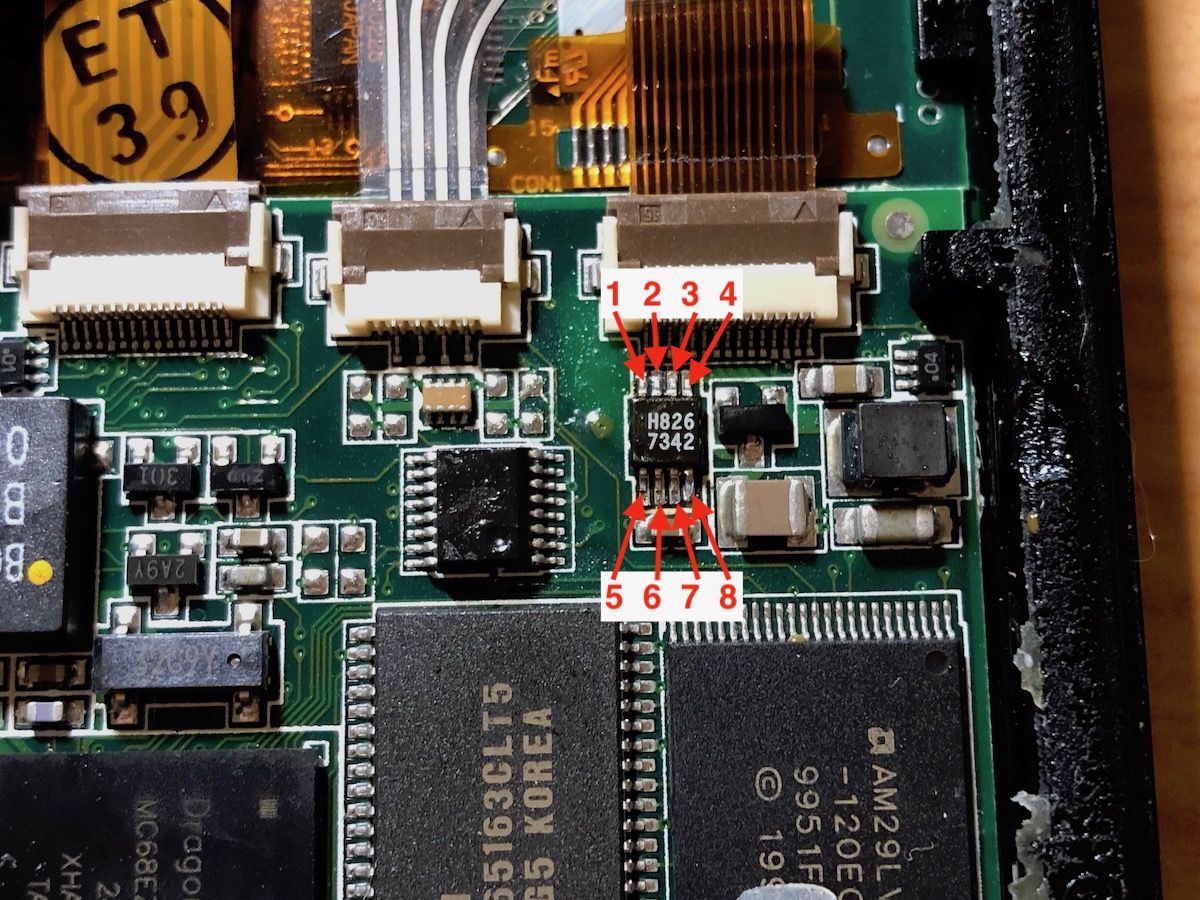 Hint: If you have a Vx with a broken backlight and want to see if the current state of the not working backlight is “on” or “off”, just switch your device off, then on again, go to “memos”, create a new sheet and enter via Graffiti: 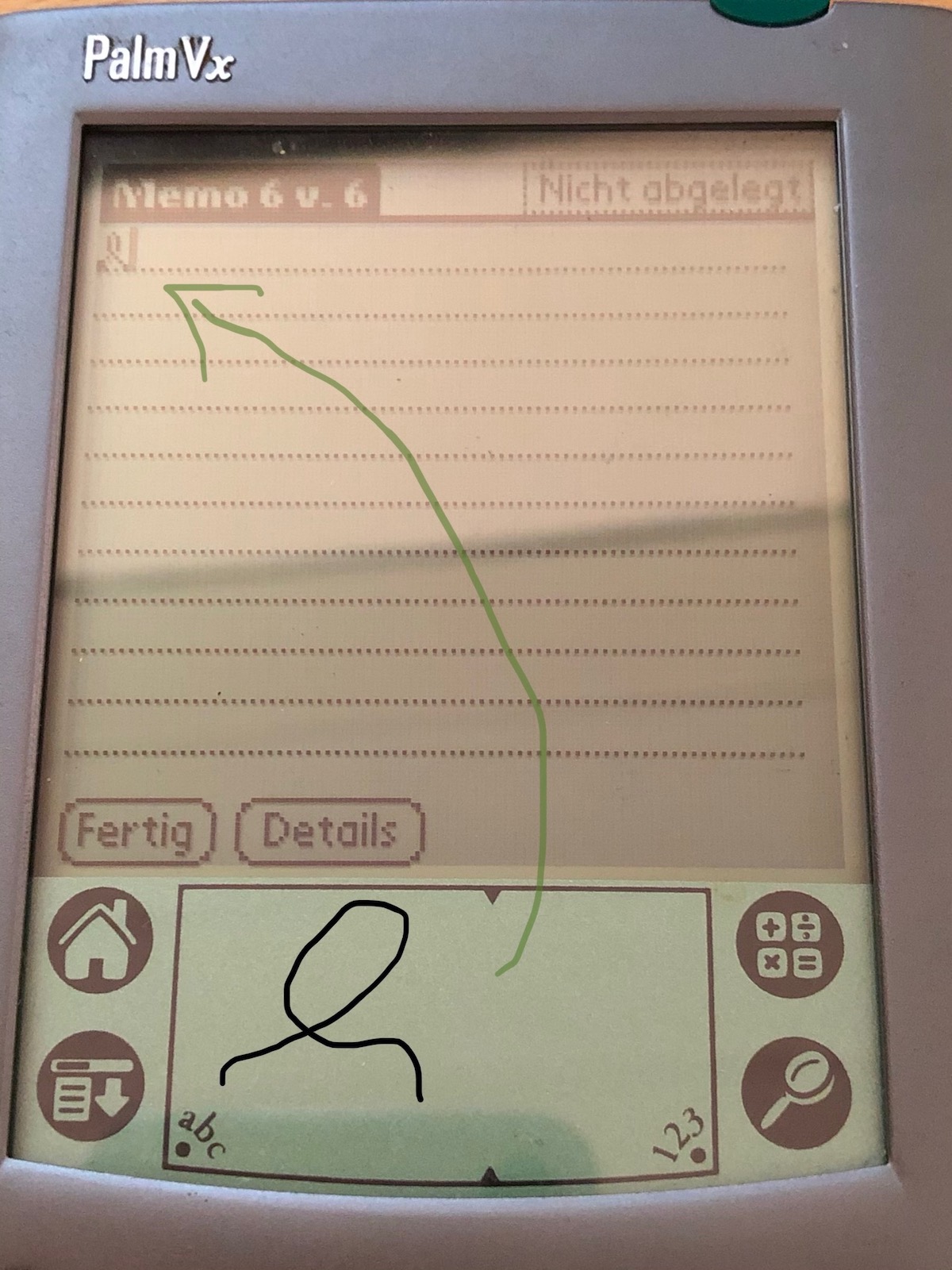 “period” as dot → . and 8 as number. (A dot is generated by double tapping the graffiti-area.)

You should now see “[Inverting Backlight]” and when you hold down the power switch, the display should invert the pixels (from “white” to “dark” and form “dark” to “white”), which means, that the status of your not working backlight is “on”: 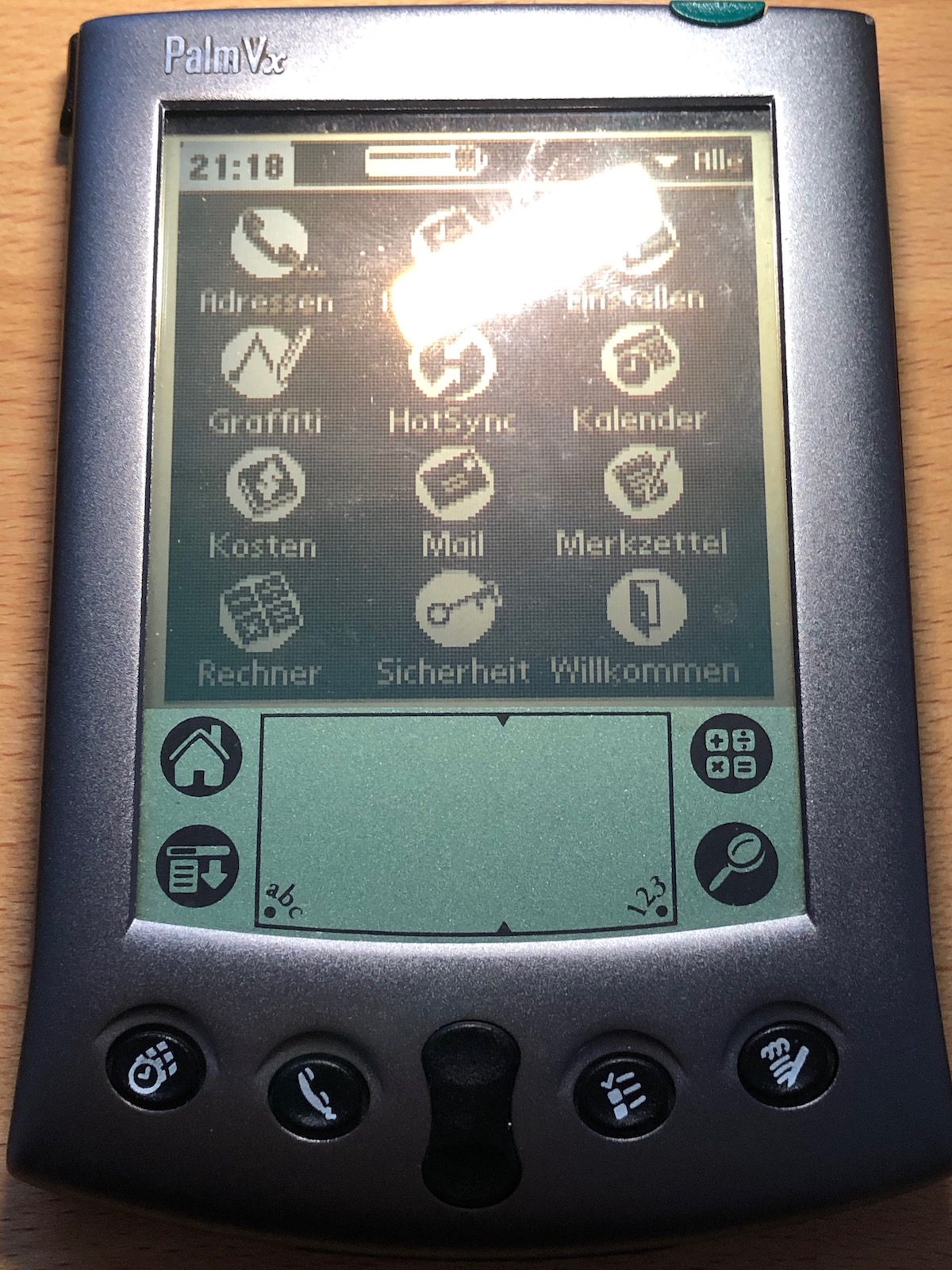